All the old elements are here, but there's some surprises, too - and some grace.
Timothy Wainwright|October 18, 2013
Image: Michael Gibson / MGM and Screen Gems, Inc.
Our Rating

Warning: as the original has been out for almost 40 years and the general plot is more or less common knowledge, this review contains a few spoilers.

Carrie was Stephen King's big break. It sold more than a million copies when it was published in paperback in 1974. Its first film adaptation in 1976 was Brian De Palma's first true commercial success, earning $33.8 million at the box office and two Oscar nominations for its leads. And it ignited an inkstorm of critical debate, not least because it was the first movie to deal explicitly with menstruation. Over the past thirty years it has become a bit of a playground for film theorists strung out on a witches batch of hardline feminism, Marxism, and post-Freudianism (with some semiotics sprinkled on top).

But there's room at this party for the theologians, especially with Kimberly Peirce's (Boys Don't Cry, Stop-Loss) decent new adaptation. She brings a feminist slant to the film—and allows some pleasant rays of grace into the story that are all her own. Stylistically, this version can't touch De Palma's—but it's a pleasant (and chilling) enough remake considering the shoes she had to fill.

This suburban legend is about ugly duckling Carrie White (played by Chloe Grace Moretz this time around) and her abusive religious mother Margaret (Julianne Moore). One day in the showers after gym class, Carrie gets her period for the first time. Because her mother never explained it to her, Carrie believes she is bleeding to death and breaks into hysterics, begging her mean-girl classmates for help. Instead the girls, led by Chris (Portia Doubleday) and Sue (Gabriella Wilde), pelt Carrie with tampons and chant "Plug it up! Plug it up!" ... 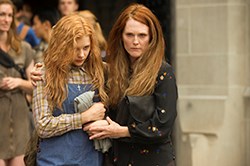