This week marks the twentieth anniversary of Rich Mullins's landmark recording A Liturgy, a Legacy, and a Ragamuffin Band. Anyone who bought that record, or many other recordings by Mullins before his death in a car accident in 1997, was bound to see another name in the liner notes, that of producer Reed Arvin. Arvin, who has spent his years since working with Mullins as a novelist writing legal thrillers as well as teaching and writing on creativity, recently took time to reflect on working with Mullins and the recording of that album.

I assume you met Rich Mullins on the road touring as a keyboardist with Amy Grant. How did you become his producer?

I did meet Rich on the road. I don't recall the city, but I recall seeing him for the first time. He was wearing a dark overcoat and looked pretty disheveled, but in an intentional way. I shook his hand but had no idea the role we would eventually play in each other's lives. I don't think I saw him again for a year or so. 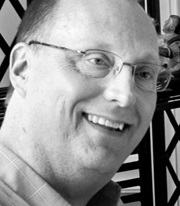 Eventually, Mike Blanton, Amy's manager, asked me quite spontaneously, "Do you think you could produce a record for Rich Mullins?"

What would you say your approach to producing was? Specifically, what did you add to Mullins's songs that wouldn't have been there otherwise?

I cared about the song more than the artist, which is not smart for a producing career. My approach was simply, "What is the emotional core of this song, and how can I bring that forward?" I really wanted to feel things listening to music. Still do.

The early records were a bit catastrophic; neither Rich nor I had any real idea what we were doing. I was in love with experimenting at a time when experimenting wasn't economically feasible. So, some of the early stuff is unlistenable. Partly, it was because of a lack of competence, but also because we would try stuff, it wouldn't work out, and then we were out of money to regroup.

Everything changed with Winds of Heaven, because that record was made for very little and sold a lot—I don't know how many, but it was certified gold (500,000) a long time ago. I imagine it must be close to platinum. We got better budgets as a result.

In terms of what I brought to the process: Probably a more musically diverse background. I knew a lot about world music and I could write orchestrations and conduct them. I had a big soundstage in my head and I liked pushing together latin percussion and orchestra and dulcimer and what not. But there were downsides to that, too. I had never been in a dirty, grungy rock band, and there were times when that would have suited Rich's music better. But to be fair, the '80s and early 90's was not a time for dirty, grungy rock bands. We were listening to Mister Mister and Toto and virtuosic bands.

Most people are surprised to learn that Rich wasn't particularly involved during recording, simply because he wasn't interested. He would disappear for long stretches. I would beg him to stay around more, because I was quite worried that he would come back after we'd spent a good deal of time going in a direction and pronounce that he didn't like it. But he very rarely expressed opinions about things musically. I very rarely had musical discussions with Rich. On the other hand, I had many, many discussions with him about politics, religion, and philosophy. And the music business. But to actually sit and talk about what to "do" with a particular song, no.

When I was a kid I would just pour over the liner notes to each of Rich's albums, and I was always surprised to see how few of the instruments he actually played on the recordings. Obviously, he played the hammered and lap dulcimer, but usually you were the one listed as playing piano and not him.

Rich was incredibly soulful musically but he possessed a particular quality many singer-pianists share: he played all over the instrument, all the time. He was used to accompanying himself, you see. He would hammer out double bass notes even if there was a bass player and things like that. So, when you added other instruments, it didn't quite mesh. Live, this didn't make so much difference. But on record, it didn't really work. Also, he had a very elastic sense of time. Making a record is just a different enterprise. But just to sit around the piano while he played and sang by himself, this was beautiful. And we did that sometimes, just for the pleasure of it.

A classic album makes the listener feel as if the music has always existed, but that also feels as if it came from another world altogether. A Liturgy, A Legacy, & A Ragamuffin Band is one of those albums for me. What can you tell us about the recording of this album? Did it seem special to you and everyone else in the midst recording it or were you all so focused on your work that you only concerned yourself with the job at hand?

I can't even imagine having the thought, "Wow, this is going to be classic," while working on a record. When things go well—I mean down to the granular level, like a snare drum sound—you quickly move on in your mind to the thing that needs attention. You spend 90% of your time fixing stuff and 10% of your time exulting in something beautiful happening.

Now, it happens that this 10% is like morphine, it's just the best thing ever. But you also have the clear sense that these wonderful moments can't really be engineered. They're serendipitous. So, your job is fixing problems while still making beautiful moments possible. But the idea that you would think, "Oh, yeah, this is awesome, people will listen to this decades from now"—that is just hilarious.

Were you surprised with the quality of songs that Rich was bringing forward? How collaborative were the musical arrangements?

I was never surprised by the quality of Rich's songs. He was the best writer in Christian music, and remains so to this day. He is untouchable lyrically. He possessed that particular combination of gift and fearlessness that equals genius. Lots of people have one or the other. It's the combination that's rare.

The arrangements as rhythm tracks were highly-collaborative, and we set things up that way from the start. We moved everyone out of Nashville to Indiana so we could just be together and work. Everyone there contributed. The hope was that we would return after a week with a set of rhythm tracks and then finish the record in Nashville. It pretty much worked out that way. Once we left Indiana, I took the tapes and did the orchestrations and overdubs with an engineer.

A Liturgy, a Legacy, and a Ragamuffin Band was the seventh album you recorded with Rich over the course of eight years, and it was recorded right in the middle of a golden age in CCM where production budgets could be a lot bigger because of the success of some of the record labels. On top of that, you and Mullins had had a sizable hit from the previous album with "Sometimes By Step." What did you bring to the recording of A Liturgy that was different this time around? How had you changed and grown as a producer, as a musician, and in your relationship with Rich?

The biggest change for me as a producer was trusting more and controlling less. Eventually, you have to exert control, but I imposed that control later in the process with every record. Sounds obvious, but in that era, it was actually difficult because of how expensive it was to record. But eventually you figure out that [if you try to control the process to tightly] you get what you paid for, no more, no less. Nothing transcendent happens that way. Transcendent moments are like shy women at a party. Walk up, say "hello," and back off. Give them a chance to come to life a little. That was much easier when the budgets increased. But it also required some growing up on my part.

Where do you think Rich would have headed musically if he hadn't died? And how do you think he would have adapted to the implosion of the music industry, especially of CCM?

Rich would have fared fantastically. He was immune financially, because he set up his life to live on a tiny fraction of what he earned. The implosion of the music business would have meant next to nothing to him. Meanwhile, the fact that the Christian radio business has become metric-driven would have pushed him off the radio in any case. Rich and I had more than a dozen hits on radio—I don't recall quite how many. But I would say effectively none could be played on Christian radio today, except as the occasional oddity.

But this would make Rich's music—the music he would have made between then and now, had he lived—even more precious to those who loved it. I think his concerts would have become events, frankly. But remember—that is only because he had achieved critical mass before the big changes. A more interesting question would be is there a Rich Mullins out there now, unable to get heard because he came along after the implosion? And we can't answer that, for self-evident reasons.

What do you think is the legacy of A Liturgy, a Legacy, and a Ragamuffin Band?

I think maybe it's a marker in time. There was a convergence of artistic freedom and budget that probably doesn't exist now. It would be very difficult for anyone to choose to make a record like that today. Not just musically, but thematically and lyrically. The value of recorded music is very small now. It's disposable. When we made Liturgy, we thought about a record as a complete thing unto itself, as opposed to "a bunch of songs." We dreamt big.

A longer version of this interview can be found on Chris Marchand's blog at http://postconsumereports.blogspot.com. Reed Arvin's current projects can be found at ReedArvin.com and he posts at Not Just Talk.