Meet the gun-loving, red meat–eating evangelical whose reading of Scripture persuaded him to embrace nonviolence.
Review by David GusheeOctober 1, 2013
Image: Illustration by Ken Orvidas
Our Rating

Do Christians really need another book on how we should think about violence and war? After all, this is well-trod ground.

To a considerable extent, Preston Sprinkle, professor of biblical studies at Eternity Bible College in Simi Valley, California, has justified his own contribution. In Fight: A Christian Case for Nonviolence (David C. Cook), Sprinkle offers a strikingly powerful, Christ-centered case for nonviolence as a way of life.

Yet Sprinkle hardly fits the usual stereotypes. One tongue-in-cheek headline for the book might be, "Manly Conservative Reformed Republican Commends Christian Nonviolence." The author is conservative, Reformed, and Republican, likes violent movies, owns guns and enjoys using them, and can bench-press 250 pounds. Sprinkle has written a book defending the doctrine of hell, claims the influence of figures like John Piper, R. C. Sproul, and John MacArthur, and in many other ways shows himself to be very conservative.

Everything about Sprinkle's method correlates with his self-described identity. His approach revolves around frequently articulated commitments to the inspiration, authority, and infallibility of Scripture. And he appears unwilling to avail himself of historical-critical analysis, though it might help his case.

In fact, one senses that Sprinkle is a bit surprised by what he has discovered. He confesses that he only began seriously studying these issues after being required to teach ethics. But his reading of Scripture ended up tugging him, however reluctantly, in the direction of embracing nonviolence. 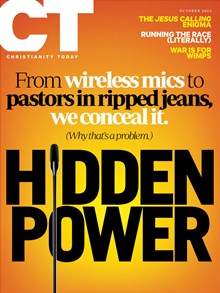 This article is from the October 2013 print issue. Subscribe to continue reading.