More of a marshmallow than a cheeseburger.
Jackson Cuidon|September 27, 2013
Image: Sony Pictures Entertainment
Our Rating

Cloudy With a Chance of Meatballs 2 is a lot like a marshmallow—and if you dislike my food similes, just wait till you get a load of the movie. It's like taking a two-hour trip down to Pun Town, where every joke's got a culinary root. It's almost scary how good the writers are at coming up with puns.

But, back to the marshmallow bit, and why it's important: to understand what makes Cloudy 2 (as it will henceforth be called) the movie it is, we need to rewind to Cloudy 1 and see what made it special. Released in 2009, Cloudy 1 was the second movie of the year to take a cherished, barely two-hundred word children's book and expand it into a feature-length movie (the first being Spike Jonze's Where The Wild Things Are). Both were met with mixed expectations from fans—accusations of "They're gonna ruin my childhood!" and so forth—and both ended up actually being stellar movies.

Both benefitted from a sense of having a pre-determined concept, because their original stories are sort of the pinnacle of high-concept kid's books. But they also had room to explore. Wild Things expanded the role of the monsters as symbols of Max's personality; Cloudy made the food-weather not a random phenomena, but the product of a son (Flint, voiced by Bill Hader) desperately trying to either prove himself to his dad (James Caan), or his deceased mom, or to others, or to himself.

It's that last bit that made Cloudy 1 worth watching—it was just barely emotionally multivalent and real enough to appeal to the older-than-six crowd, while still being filled to the brim with enough bright dazzling visuals to keep little kids thoroughly entertained. Most kid's movies' ... 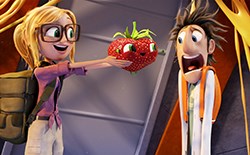