A gorgeous film about Alaska’s brown bears, but the background scenery almost steals the show.
Mark Moring|April 17, 2014
Image: Disneynature
From "Bears"
Our Rating

There are three great reasons to watch Bears, the latest documentary in a series of theatrical releases from Disneynature.

Reason No. 1: The Title Characters 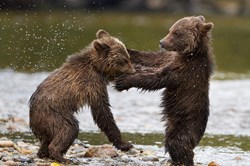 This is a beautifully shot film about Alaska's brown bears, particularly focusing on a family of three—a momma bear named Sky and her cubs, Scout and Amber. They're just arbitrary names that the filmmakers assigned to the creatures for the sake of telling a kid-friendly story. The movie follows our ursine friends on a nearly year-long adventure, starting with some how-did-they-do-that footage of the cubs' birth while still in their den.

We see their ridiculously cute first wobbly steps as they emerge from the den at the verge of spring. We see them trying to keep up with Sky as she leads them down the mountain slopes—dodging an avalanche along the way!—to a verdant meadow, where they feed on grass with other bear families. We meet the massive Magnus, a half-ton alpha male who strikes fear into all the other bears, and his rival Chinook, an outcast who apparently won't hesitate to gobble up one of the cubs. (He doesn't, but these films always include perils—some quite real, some concocted—to keep the story moving along. Our protagonists need to face some sense of danger, right?)

We learn that Scout is a rambunctious, fearless rascal who sometimes wanders away and gets himself into trouble. We learn that Amber is more of a momma's girl, staying close to Sky while taking it all in. And we learn that Sky is a mostly competent mom willing to do anything for her children—including fight off intruders who regard them as a potential meal. It's a joy to watch her lead the cubs from the appetizer (the sweet grasses and berries of the meadow) to the main course (the protein-rich salmon that are spawning upstream). 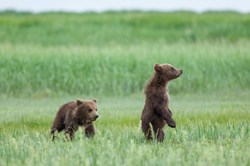 And we learn some fascinating bear facts along the way:

For the most part, the story in Bears feels "real," organic to what's unfolding on the screen. Some storylines in previous Disneynature films, especially 2012's Chimpanzee, felt a bit forced, edited almost to excess to fit the footage. But as a chronological story, Bears follows a natural plotline that feels just right.

We meet other animals along the way. Wolves. Foxes. Bald eagles. Squirrels.

Reason No. 2: The Narrator

The narrators for previous Disneynature films have been hit-or-miss. Patrick Stewart and James Earl Jones were two of the four narrators on 2009's Earth, the debut from the Disney spinoff studio—and they were marvelous. Pierce Brosnan did 2010's Oceans, and while the film was terrific, the narration was just okay. Samuel L. Jackson was a pretty good storyteller for 2011's African Cats, and then Tim Allen zonked in Chimpanzee. (To be fair, the golden-voiced Allen—sensational in the "Pure Michigan" radio and TV spots—had a lame script to work with.)

But who would've thought that John C. Reilly might be the best of the bunch? (Not me.) Reilly hardly has the finest speaking voice, compared to his predecessors. (I'd listen to Stewart and/or Jones read the phone book.) Reilly can be nasally and whiny, and he's certainly not going to win any Shakespearean soliloquy throw-downs.

But he's absolutely brilliant as the narrator of Bears­. If a voice can be as cute, cuddly, and fun-loving as the frolicking cubs we're watching, well, Reilly pulls it off. Unsurprisingly, his background as a comedian comes in handy during the film's lighter moments, especially as he "speaks" for the bears, his timing impeccable. But there's also just enough gravitas in his delivery for the film's more serious moments. It's endearing throughout, and almost worth the price of admission in itself.

Reason No. 3: The Scenery

I've traveled to numerous places around the world, but I've never seen a place more beautiful, more breathtaking—and I mean that literally—than Alaska. Denali National Park rendered me almost speechless. The Alaska Range is not just the most amazing thing I've ever seen; it's also one of the most terrifying. You feel like you could soar, and you feel like you could die—or at least get hurt really, really bad. 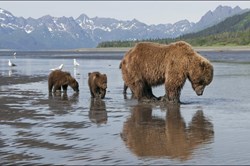 It's one of those parts of Creation where you see and feel God's glory—and his awesome, awful (in the archaic sense of the word) power. You want to embrace, and you want to run away, all at once. It was, for me, something akin to a Burning Bush moment.

Though Bears isn't filmed in Denali, it showcases enough of Alaska's vast wilderness that you'll get much of the same sensation in watching this film. Some of the scenery is jaw-droppingly spectacular. Much of the movie was shot in Katmai National Park and Preserve, right where the Alaskan peninsula joins the mainland. And it's stunning. A dozen or more scenes in this movie will take your breath away.

"We wanted to take audiences to one of the most beautiful places in the world—an area people hope to visit, but never do," said director Alastair Fothergill. "Now they can see Alaska through the eyes of a mother bear and her cubs."

It's a journey well worth a trip to your local movieplex.

Be sure to hang around for the closing credits, where they include clips of Fothergill and his team filming the action. You'll be astonished at how close they get to their subjects!

Bears is rated G and is very family friendly, appropriate for ages 4-up. There are moments of mild peril, but no animals die in the film. The only blood is when the bears catch salmon and rip them apart with their claws and teeth. But hey, think of it as sushi.