Movies can do so much more than advertise products and give us a jolt of personal-fulfillment feel-goods. But not this one.
Rachel Marie Stone|December 22, 2014
Image: Barry Wetcher / Sony Pictures Entertainment
Jamie Foxx and Quvenzhané Wallis in 'Annie'

In the corner of my home office, tucked safely away in her original box, is my American Girl doll, Molly. She's the World War 2 era American girl, the one who bravely faces down rations of food and fuel that interfere with Christmas celebration, marches door to door to collect scrap metal, and shares her birthday with a little girl whose refuge from war-torn London is Molly's American home. Like the other original American Girls, including Samantha and Addy, Molly manages to be a believable, lovable child while still participating meaningfully in the Big Issues facing her society in her day.

The same could be said of the plucky, cheerful Annie as she's portrayed in the stage musical, later adapted into the beloved 1982 film starring Aileen Quinn in the title role. Annie's an appealing blend of tough and tender: the kind of girl who's unafraid to raise her fists to a gang of boys abusing a dog (or, for that matter, a bratty older girl who bullies the younger children in the orphanage) and also the first person you'd call when you woke up from an awful nightmare. She sings her earnestly optimistic song to FDR and convinces her emphatically Republican benefactor, Daddy Warbucks, to help Roosevelt out by bringing his organizational savvy to the New Deal.

Daddy Warbucks is reimagined in the new Annie remake as William Stacks (Jamie Foxx) as a cell-phone mogul. He doesn't hold conferences with President; rather, Bloomberg-like, he himself aspires to political office as New York City mayor, locked in a tight race with a candidate who bears a slight resemblance to the late Ed Koch and who has taught in New York City public schools. That is where we first meet the new Annie (Quvenzhane Wallis) as ... 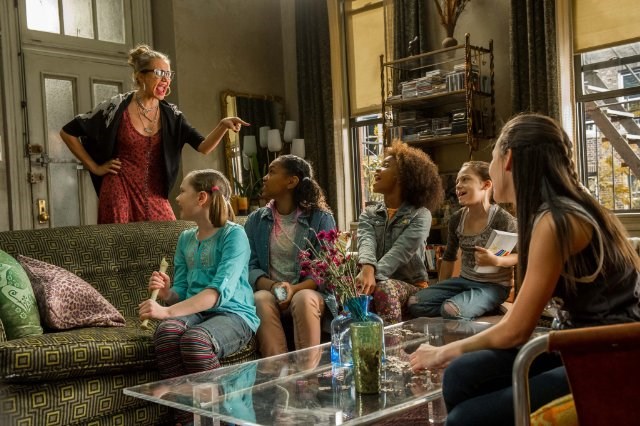