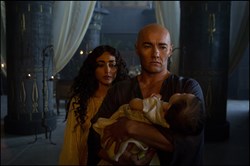 Golshifteh Farahani and Joel Edgerton in 'Exodus: Gods and Kings'

This approach might balk at the problematic casting of white actors as Egyptians, non-white actors as slaves/servants, and the inexplicable preponderance of British accents. And most of all, this approach would complain about the depiction of God’s communication with Moses through a (spoiler alert!) zealous, wrathful 11-year-old British boy.

Though Exodus: Gods and Kings doesn’t have the art-house edge or in-your-face craziness of Darren Aronfosky’s Noah, it still won’t be an easy sell for by-the-book evangelicals. With an atheist as its director and a lead actor who regrettably suggested Moses could be seen as “schizophrenic” and “barbaric,” the film more than invites skepticism from biblically faithful filmgoers. The hardhearted “Ramses” approach is thus the expected response from dubious Christian audiences. But another approach is possible.

What if we let our skeptical, hardened hearts be softened by considering what is good, true, beautiful, praiseworthy and excellent about the film? Consider the following ten observations about Exodus: Gods and Kings that may offer reason to “let your skepticism go.”

1. The film is beautiful. It employs all the cinematic tools at its disposal (including surprisingly gorgeous, effective 3D) to create an immersive, detailed, breathtaking world on an epic scale. The grand sets by Arthur Max (Gladiator, Se7en), lush photography by Dariusz Wolski (Prometheus, The Crow) and exceptional work by scores of digital artists would certainly make Cecil B. DeMille stand up and cheer.

2. Speaking of DeMille—whose The Ten Commandments (1956) is an arduous four hours long—Scott’s Exodus clocks in at a brisk two-and-a-half hours, displaying admirable editing and storytelling economy for a tale so loaded with plot (though the opening Egyptians vs. Hittites battle scene could have been a few minutes shorter).

3. For a film so committed to realism, the casting of white people in all the major roles is indeed problematic. The filmmakers, most notably Ridley Scott, say this was driven by entrenched industry habits in which big budgets ($140 million) and big box office hopes are concerned. But aside from this issue, Exodus—filmed in London’s Pinewood Studios, Spain and the Canary Islands—does seem to care about fidelity to the time, region and culture in which it is set.

4. The controversial choice to depict God’s mouthpiece as a young boy called Malak (11-year-old British actor Isaac Andrews), who is only visible to Moses, actually works. Before you shout heresy, ask yourself: If you were a filmmaker, how would you visualize God’s voice? In a story where Moses has frequent conversations with a rather garrulous “I Am,” what are the options? A booming, James Earl Jones-esque voice from the clouds? Morgan Freeman in an all-white suit? Any visual artist telling this story must make an artistic decision, and though it may not be perfect, I found Scott’s choice to be compelling and interesting, in a good way.

5. Fear not: God’s presence is also depicted as a burning bush.

6. The attention to period detail and the level of artisan craftsmanship in the film is exquisite. The costumes, jewelry, makeup, architecture, embellishments and textures in every shot of Exodus feel as authentic as something you’d see under glass in the British Museum. There are few filmmakers who do world-building better than Ridley Scott (Alien, Gladiator, Prometheus), and on this score Exodus may be his crowning achievement.

7. The “plagues” sequence is everything you’d hope it would be. Few chapters in the Bible are as inherently cinematic as Exodus 7-11, and with the help of thousands of CGI artists and 3D technology, the supernatural onslaught of frogs, flies, hail and bloody water confronts the viewer viscerally in a way that written words or picture books cannot. Similarly, the climactic “parting of the Red Sea” sequence is absolutely epic and awe-inspiring.

8. Though it would have benefitted from a bit more quiet reflection and character development amidst the big-budget battles and CGI spectacle, on the whole Exodus has compelling characters and good acting. Bale and Edgerton are quite good in the lead roles, and some of the supporting actors have fun with their parts (I particularly liked Ben Mendelsohn as a villainous viceroy). I did long for more scenes with Ben Kingsley (who plays an elder leader of the enslaved Hebrews) and Aaron Paul (Joshua), however.

9. Plot deviations and minutiae aside, key themes of the Exodus story are there. Moses is rightly portrayed as a reluctant and rough-around-the-edges leader, though ultimately faithful to his calling. God’s favor upon and covenant faithfulness to the Hebrews is evident, especially in contrast to the ineffectual polytheism of the Egyptians. The presence of God with his people is clear (“God is with us!” shouts Moses on the banks of the Red Sea), even as the “wrestle” between Yahweh and the often-unfaithful Israelites also comes through. “Israel,” after all, literally means “struggle with God.”

10. The film is personal to Ridley Scott. In part a story about brotherly rivalry, Exodus is dedicated to Ridley’s late brother, fellow filmmaker Tony Scott, who committed suicide in 2012. Imagine pouring yourself into a passion project on the scale of Exodus only to see it rebuffed and rejected perhaps most ardently by those who claim to live according to a gospel of grace.

Exodus: Gods and Kings is by no means a perfect film. But it’s a very good film with exceptional devotion to craft, which is more than can be said for many other Bible-themed movies, which often favor accuracy over artistry. As I wrote in an article a year ago on the topic of atheists making Bible movies,

Rather than bashing another not-perfectly-biblical Bible movie, what if we praised its beauty? What if we celebrated the fact that, as Noahdid back in April, Exodus: Gods and Kings will likely increase online searches for the relevant Bible passages by 300 percent or more? What if instead of issuing nitpicky complaints as the theological police, Christians extended compassion and thanks as the people of God, grateful to see parts of the Bible’s story told on screen?

Exodus: Gods and Kings is rated PG-13 for violence. Like any Ridley Scott sword and sandals epic, war violence of every sort (death by hanging, sword, ax, arrow, spear, chariot wheel, and so on) is rampant in Exodus: Gods and Kings, though actual gore and blood is relatively minimal. We also see characters hanged and bodies of dead Hebrews piled up and burned. The plagues sequence features all sorts of death and destruction, including many dead children. Livestock vomit blood and lambs are slaughtered. Alligators jump onto boats and eat people. Scores of Egyptian soldiers tumble off cliffs and are drowned in the Red Sea.