A major Hollywood studio plans a comedy film mocking a prominent world leader and featuring a pair of comedians involved in an assassination plot. A foreign nation, outraged over the director’s artistic sensibilities, uses his image in its own propaganda, citing him and his work as the epitome of a culture that must be annihilated. A high-profile critic in the most prestigious newspaper in the country pans the film as tasteless and unfunny. Even some of the film’s production staff begins to second guess their director, wondering if by making light of a real evil, they are making it easier for Americans to not take it seriously.

When Ernst Lubitsch’s comedy began filming, America was still on the sidelines of World War II. By the time the film opened, the nation had been attacked on its own soil by one foreign power and had committed itself to opposing the spread of fascism.

Yet To Be or Not to Be was not a typical wartime propaganda film. Its characters were not, for the most part, soldiers engaged in formal combat against the Nazis. Members of the acting troupe at the center of the film were Polish, and as the film opens they are rehearsing their own political satire: Gestapo. That play, complete with a Hitler look-alike who prompts audience guffaws by entering a room and solemnly barking “Heil Myself!” never does get to open. The German army overruns Warsaw and shows an unsurprising lack of humor about being mocked in the public square.

Through a set of comedic circumstances, the “great, great Polish actor, Joseph Tura” (perhaps you’ve heard of him?) and his wife, Maria, find out that Professor Siletsky is collaborating ... 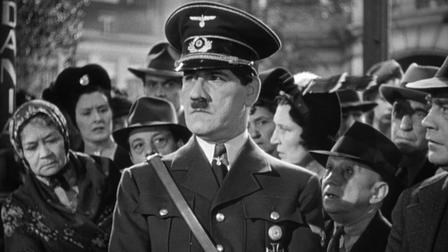