Nothing is black and white, even in a fairy tale.
Alicia Cohn|December 24, 2014
Image: Walt Disney Studios
Meryl Streep in 'Into the Woods'
Our Rating

Retelling fairy tales is a tricky business. Audiences love fairy tales and fairy tale characters in part because of their familiarity, and adding layers to what tend to be one-dimensional characters can overshadow what was beloved about them in the first place.

Into the Woods, which has been beloved of audiences and high-school dramatic clubs alike since its 1986 premiere, works in part because it both retells the traditional fairy tales and adds a twist ending, applying a touch of cynicism with a wink to modern irony. As penned by the great Stephen Sondheim (Sweeney Todd, Company, A Little Night Music), the second half of the story essentially deconstructs the first.

Disney’s movie version struggles with that demarcation. The first half feels mostly predictable and the second half, in portraying what happens after “happily ever after,” often too dark.

In this remix of several Brothers Grimm tales, from a screenplay written by James Lapine (who wrote the book for the musical), the princesses Cinderella and Rapunzel (Anna Kendrick and Mackenzie Mauzy) gain some agency—including the freedom to be both indecisive and brave—and the princes some less charming habits. The witch has motives beyond just being “the bad guy” and Little Red Riding Hood (Lilla Crawford) is a bit of a brat.

But Into the Woods isn’t just another retold fairy tale in the style of Maleficent and Mirror Mirror. It is also a musical in an era when good movie musicals are rare. And there are songs. Lots of songs.

In fact, Into the Woods is an old-fashioned movie musical in which the songs are far more heavily showcased than the plot. A viewer’s enjoyment of the film depends on how familiar she ... 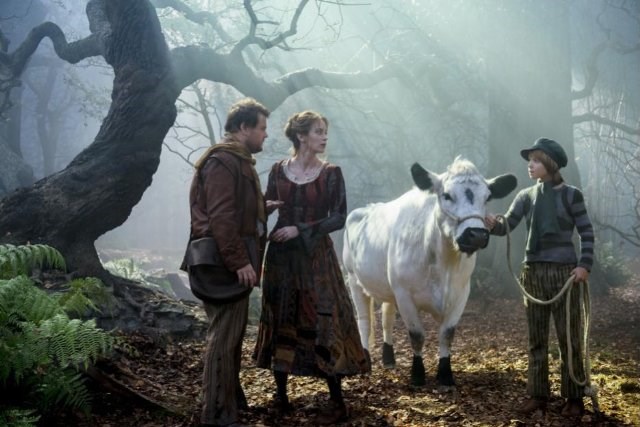