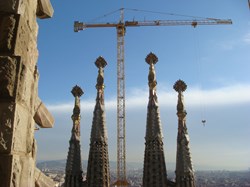 Gaudi, a Catholic, was a man of deep faith and constant prayer. He loved both God and nature, and freely worked both into his drawings and creations, especially La Sagrada. Gaudi, often called “God’s Architect,” believed his ideas were divinely inspired. Many others agree, and they regard La Sagrada as a literal miracle—not just a structure made of concrete and steel, but a living monument to God, capable of working wonders in those who visit, or even gaze upon it from a distance, as I once did.

Today, a group of Gaudi devotees are lobbying the Vatican to bestow sainthood upon him. (Really.) Japanese sculptor Etsuro Sotoo, one of those disciples, spent decades working on parts of the cathedral, trying to integrate Gaudi’s vision into his craft. When he began, Sotoo was a devotee of Buddhism and Zen, but through his work on La Sagrada, he became a Christian. He says he then stopped looking to Gaudi for inspiration. “I had to start looking where Gaudi looked.” In other words, to God.

Sagrada, the documentary, begins with a voiceover quoting Gaudi:

I believe in a God in heaven who created this world. . . . I believe that men were created in the image of God, both creature and creator.

The film is made up of equal parts of footage of the cathedral, biographical information about Gaudi, and interviews with people affiliated with the project or employed by the cathedral. (Even though it’s still a work in progress, it’s also a working church, with a full-time staff, holding mass and services. Meanwhile, other parts of the building are buzzing with workers, builders, and architects—working from drawings and models that Gaudi left behind, fulfilling his vision for this exquisite house of God.)

Choir director Jordi Savall compares the cathedral with Bach’s Mass in B Minor—as a work of art that is ever developing.

“Maybe we will never find the perfect interpretation of the Mass as Bach imagined it,” Savall says after leading his choir through a rehearsal of that work. “It would be the end if we found it. It’s good we don’t know it, so we’ll continue to be challenged by it.

“A building like this is also a way of interpreting and continuing something. It’s part of the evolution of a work of art, when life takes over independently of its creator.”

One of the things I most enjoyed about this film is that it embraces the mundane process of creating something beautiful. Interspersed between the interviews and the biological tidbits are scenes of men working and the sounds of construction.

A filmmaker or photographer might be tempted to zoom in on just the pretty things—the parts of the cathedral that are complete. And while we do get plenty of that, director Stefan Haupt is content to include the scaffolding in front of the stained glass, the tarps over the sculptures, the welders high on their ladders, sparks falling to the floor. And the sounds! Throughout the film, we hear the jackhammers, the saws, the machinery.

We, as viewers, are immersed in the ongoing creation of a work of art, one that may not be finished for decades yet.

A foreman on the site, speaking in Spanish, tells the camera, “We owe it to Gaudi to finish this temple and to show the world his genius.”

On a missions trip to Spain about 20 years ago, I flew into Barcelona and only saw La Sagrada from a distance. The towering, magnificent cathedral, its spires reaching for heaven, took my breath away.

My soul soared, like those spires, and I have been strangely, curiously drawn to return ever since. Whether it’s finished or not.

Sagrada: The Mystery of Creation is playing in limited theatrical release.

Mark Moring is a CT Editor at Large and a writer at Grizzard Communications in Atlanta.