Baptizing the Dora Generation: Why Preschooler Faith Is So Controversial

Southern Baptist leaders would rather ‘the only consistently growing group in baptisms’ be shrinking.
Kevin P. Emmert|June 10, 2014
Image: Gamma Man / Flickr
Baptism service at an SBC church in Virginia.

For the seventh year in a row, the Southern Baptist Convention, America's largest Protestant denomination, has seen a "heartbreaking slide" in baptisms. Last year saw the second-worst total of baptisms in 60 years, and this year the denomination lost more than 105,000 members and 188,000 Sunday worshipers, according to its Annual Church Profile.

SBC leaders were so grieved over its dwindling evangelistic effectiveness that they appointed a Pastors' Task Force last year to address the stark decline in evangelism and baptism.

While the number of baptisms is down for most age groups, "the only consistently growing group in baptisms is age five and under," the task force reported. Granted, baptisms in this group comprise a small number of the total number of baptisms, but the preschool age group saw a 96 percent increase from 1974 to 2010. In fact, this group had the strongest trend line over the 37-year period. Just behind the preschool group was the senior adult group (ages 60 and up), with a 67 percent increase. And is the approximately 4,000 annual baptisms of children under 6 a small figure? Consider that North American Mission Board president Kevin Ezell today announced that in the most recent year of reporting (2012), the SBC's 2010 church plants baptized 3,394 people. 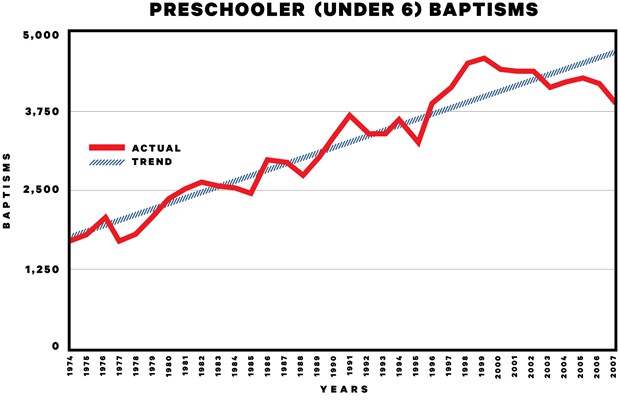 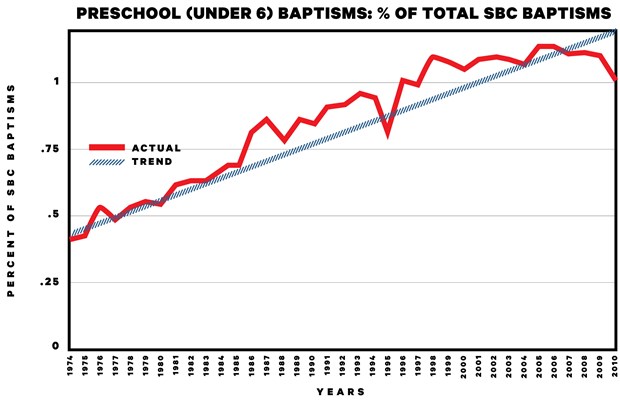 Credobaptist traditions like the SBC usually baptize children at the "age of accountability" or "age of reason." The Baptist Faith and Message asserts that children are not morally accountable until they are "capable of moral action." Based on the coming-of-age celebration in Jewish culture (bar mitzvahs for boys and bat mitzvahs for girls), some place the age of accountability around ages 12 and 13. However, since children develop at different rates, there is latitude on pinpointing personal spiritual maturity. Still, Southern Baptist churches have traditionally said children cannot make a legitimate profession of faith until preadolescence. Thus, baptism is typically reserved for prepubescents on up.

For instance, David Galvan, a task force member and pastor of New Life Hispanic Baptist in Dallas, said, "In our church, we have followed the example of W. A. Criswell [former SBC president] and baptize children at nine years of age [and older]." He also said he personally didn't know of any Baptist churches that baptize children under five.

Yet numbers show a continuing upward trend in preschooler baptisms. Alvin Reid, evangelism professor at Southeastern Baptist Theological Seminary and task force member, said he suspects the main reason for the increase is "well-meaning parents so want their children to follow Jesus that pastors have been pressured and have not taught well biblical conversion and discipleship."

Women's Missionary Union preschool ministry consultant Joye Smith said she hasn't heard much concern from church leaders. She said she is not concerned about young children being baptized if the family of the child "is actively involved in the church and are going to give the discipling that the child needs in order to grow in faith."

Timothy George, founder of Samford University's Beeson Divinity School, said, "Baptizing younger and younger children is a way of inculturating them to be Baptist." But George doesn't believe this trend is favorable for the Baptist tradition. Rather, it "calls radically into question what Baptists have historically said baptism means. For Baptists, baptism is supposed to be a confession of faith, a life commitment. It's like getting married," he said.

Other Southern Baptist leaders, however, believe reaching older generations is the real problem. Andy Addis, pastor of CrossPoint Church in Hutchinson, Kansas, and a task force member, said the number of preschooler baptisms is significant, "but mostly when put in perspective with the other age categories. It shows that there is little forward momentum in the other ages."

Galvan agrees: "I am convinced our inability to reach the masses of under 30 years old is a critical issue facing us." But reaching younger children is not a problem for the SBC, he said.

Baptizing the Dora Generation: Why Preschooler Faith Is So Controversial

Baptizing the Dora Generation: Why Preschooler ...