Is parenting more than the sum of 18 years worth of peanut butter sandwiches and thrice-weekly soccer practice? Often, for parents deep in the trenches of grass-stains and sibling conflicts, the ultimate goal of parenting gets buried under the details.

Last year, in an article for New Republic, Mark Oppenheimer described his experience as a parent at a toddler's birthday party:

One mother was trying to keep her daughter from eating a cupcake, because of all the sugar in cupcakes. Another was trying to limit her son to one juice box, because of all the sugar in juice. A father was panicking because there was no place, in this outdoor barn-like space at some nature center or farm or wildlife preserve, where his daughter could wash her hands before eating. And while I did not hear any parent fretting about the organic status of the veggie dip, I became certain there were such whispers all around me.

And parents aren't just fretting about food and hygiene. Rosa Brooks wrote recently for The Washington Post: "today, parenting has become a full-time job: it requires attendance at an unending stream of school meetings, class performances and soccer games, along with the procurement of tutors, classes and enrichment activities, the arranging of play dates, the making of organic lunches and the supervising of labor-intensive homework projects."

For his part, Oppenheimer thinks parents themselves are complicit in the detail-obsessed anxiety-inducing character of modern parenthood: "[they] have allowed lifestyle decisions about what they wear, eat, and drive to entirely replace a more ambitious program for bettering society. . . It's enough that they make their midwife-birthed children substitute guava nectar for sugar." Others, like Brooks, see frantic parenting as the imposition of a culture with high expectations but few supportive resources.

If you are a parent, whatever your politics, you probably share some of these frustrations.

Many modern moms and dads feel tension between the tyranny of life's details and a broader vision for parenting. In the introduction to her new book, All Joy and No Fun: The Paradox of Modern Parenting, Jennifer Senior writes: "Today parents pour more capital—both emotional and literal—into their children than ever before… Yet parents don't know what it is they're supposed to do, precisely, in their new jobs. 'Parenting' may have become its own activity (its own profession, so to speak), but its goals are far from clear."

Rather than directing us, our parental to-do lists seem to be confusing us, prompting us to assign equal urgency to choices about our children's breakfast and their character development. Like the biblical Martha, we are busy with many things but cannot seem to identify "the one thing [that] is necessary." (Luke 10:42)

Set against the clutter and chaos that is modern parenting, Gloria Furman's new book, Treasuring Christ When Your Hands Are Full: Gospel Meditations for Busy Moms, is refreshingly single-minded. In a series of 11 loosely connected meditations on the gospel and motherhood, Furman sets aside the daily details in order to help mothers more clearly see their goal. "At the end of every day—chaotic and mundane alike—" she writes, "motherhood is about the adoration and enjoyment of our great God." 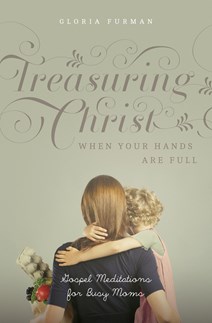 Furman's point is simple. Frazzled mothers don't need more time, or better strategies, or even renewed resolve. They need more of the gospel—the good news that God sent his Son to die for sinners so that their sin might be forgiven, their guilt atoned for, and their souls reconciled to God. Treasuring Christ intentionally does not read as a how-to parenting book, but still appeals to women in many circumstances through a gospel focus, which transcends culture and life situation. Single moms, adoptive moms, step-moms, even—I dare say—a few dads will here find food for the soul.

Those who read Furman's first book Glimpses of Grace (a winner in The 2014 Christianity Today Book Awards) will already be familiar with many of her themes in this book: God's grace in ordinary circumstances, freedom from pharisaic legalism, and new identity in Christ. With Treasuring Christ, she applies them specifically to the work of mothering. In one chapter, Furman shows how the redemptive purposes of God free mothers from having to orchestrate their children's lives. In another, she highlights the power of God as it works in even our weakest moments. And always she reminds mothers to adopt an eternal perspective.

This is particularly useful for modern moms. Recently, for The New Yorker, Andrew Solomon summarized the dual perspective of parenting this way, "All parenting involves choosing between the day (why have another argument at dinner?) and the years (the child must learn to eat vegetables.)" Furman goes one step further, repeatedly urging her readers that mothering is about nothing less than eternity. "Our children are so much more than just potential adults who will one day contribute to society," she writes, "Our children are people made in God's image, and they have eternal souls."

In an unintentional counterpoint to Senior's All Joy and No Fun title, Furman writes winsomely, "Being a mother is wildly fun, yet because of eternity it is serious joy at same time." According to Furman, motherhood is at its best when mothers remember who they, and their children, are in Christ and the future they will have with Him forever.

My one criticism of this helpful and Scripture-filled book is that, in dwelling almost exclusively on what the gospel frees mothers from (sin, guilt, and just condemnation,) it does not present much of what the gospel frees us to (new obedience and fellowship with Christ). Furman frequently refers to spiritual disciplines and motherly good works as opportunities for pretense, self-righteousness, and pride, which leaves the reader with a sense that such things as catechizing children or prioritizing time for personal Bible study and prayer are dangerous prequels to sin, rather than the diligent outworking of a compelling love for Jesus.

Christ's blood shed on the cross purchased not only pardon, but also relationship. The redeemed, per Romans 14:8, "live to the Lord." And I found myself wishing this book had more of the warmth and sweetness which come not merely from understanding our legal standing before a holy God (which is amazing grace indeed) but also from personally knowing, being united to, and intentionally delighting the gospel's central Person—Jesus Christ—the Christian mother's savior, teacher, example, brother, bridegroom, companion, and friend.

Furman is at her best when she talks about the limited scope of motherhood and the limitless privilege of glorifying God. To mothers weary of over-scheduling while seemingly always under-achieving, Furman writes, "The Bible describes motherhood as neither a diminishing of a woman's personhood nor the sum of her personhood…we get bored with motherhood when we obsess over it, because motherhood was never meant to fully satisfy us." Ultimate—and decidedly un-boring—satisfaction can only be found in the message of the gospel.

For the sleep-deprived, peanut-butter-smeared, and laundry-avalanched, for every mother who is overwhelmed by the details, Treasuring Christ When Your Hands Are Full points its readers to big—and grace-filled—truth.