(UPDATED) President Richard Stearns: 'Certain beliefs are so core to our Trinitarian faith that we must take a strong stand on those beliefs.'
Celeste Gracey and Jeremy Weber|March 26, 2014

Only two days after announcing it would hire Christians in same-sex marriages, World Vision U.S. has reversed its ground-breaking decision after weathering intense criticism from evangelical leaders.

"The last couple of days have been painful," president Richard Stearns told reporters this evening. "We feel pain and a broken heart for the confusion we caused for many friends who saw this policy change as a strong reversal of World Vision's commitment to biblical authority, which it was not intended to be."

"Rather than creating more unity [among Christians], we created more division, and that was not the intent," said Stearns. "Our board acknowledged that the policy change we made was a mistake … and we believe that [World Vision supporters] helped us to see that with more clarity … and we're asking you to forgive us for that mistake."

"We listened to [our] friends, we listened to their counsel. They tried to point out in loving ways that the conduct policy change was simply not consistent … with the authority of Scripture and how we apply Scripture to our lives," said Stearns. "We did inadequate consultation with our supporters. If I could have a do-over on one thing, I would have done much more consultation with Christian leaders."

"What we are affirming today is there are certain beliefs that are so core to our Trinitarian faith that we must take a strong stand on those beliefs," said Stearns. "We cannot defer to a small minority of churches and denominations that have taken a different position."

"Yes, we will certainly defer on many issues that are not so central to our understanding of the Christian faith," he said. "But on the authority of Scripture in our organization's work [and employee conduct] ... and on marriage as an institution ordained by God between a man and a woman—those are age-old and fundamental Christian beliefs. We cannot defer on things that are that central to the faith."

Today's letter explaining the reversal was overwhelmingly approved by the board, Stearns said [corrected]. The letter is posted in full below. [Editor's note: All references to "World Vision" refer to its U.S. branch only, not its international umbrella organization.]

The initial decision faced heavy backlash from the evangelical community—including Al Mohler, Russell Moore, John Piper, and Franklin Graham—with few voicing open support for the decision. The day after the initial policy change was made, the Assemblies of God, one of America's largest and fastest-growing denominations, urged its members to consider dropping their financial support from World Vision and instead "gradually shifting" it to "Pentecostal and evangelical charities that maintain biblical standards of sexual morality."

"The U.S. branch of World Vision has placed Pentecostal and evangelical churches in a difficult position," said George O. Wood, general superintendent of the 3-million-member AG, before the reversal. "On the one hand, we applaud the work they do among the poor in America and around the world, and many churches have supported that work financially for some time. On the other hand, World Vision's policy change now puts them at odds with our beliefs regarding sexual morality."

On Wednesday night, Wood encouraged "Pentecostals and evangelicals who hastily canceled their sponsorship of children in World Vision programs to immediately reinstate that support in order to ensure continuity of care for the poor children whom Christ loves."

Stearns acknowledged Wednesday [March 26] that "a number" of child sponsors canceled their sponsorship in the past 48 hours in protest of the change to World Vision's conduct policy.

"That grieves us, because the children we serve will suffer because of that," he told reporters. "But our choice is not about money or income. It's a sincere desire for us to do the right thing. To be consistent with our core values, and to respond to the legitimate feedback and counsel we have received from supporters and friends of World Vision."

World Vision had hoped to take what it described as a neutral position in the gay marriage debate by deferring it to the local church. The changed policy still required singles to remain abstinent and married couples to maintain fidelity, but no longer limited marriage to heterosexuals.

"They were not taking a position supporting same-sex marriage or homosexuality," said Tim Dearborn, director of Fuller Seminary's Lloyd John Ogilvie Institute of Preaching, who previously oversaw how World Vision's Christian commitments were implemented across its international partners. Instead, he said World Vision, which has a "deep commitment to live and serve in ways that are consistent with Scripture," was attempting to do three things.

"First, to focus on the aspects of the biblical mandate that are non-negotiable: caring for the poor, victims of injustice, and especially children," said Dearborn. "Second, to contribute to the unity of the church around those things, at a time when the church is fractured. And third, to contribute as a result of that to the credibility of the gospel and the church in the eyes of American society."

More than 2,000 of the 1.2 million children sponsored by World Vision U.S. had been dropped between CT's first reporting of the decision and Tuesday afternoon, according to a tweet by Ryan Reed (he credited his wife, who works at World Vision, with the information; the tweet has since been deleted). But it was not clear whether those numbers were a net loss or had been offset by new donors, said former World Vision staffer Ben Irwin.

"Assuming the '2,000' figure is accurate, that amounts to just under two-tenths of one percent of all kids sponsored through World Vision U.S.," Irwin wrote. "But this was never about percentages. This is about real lives. It's about kids in impoverished communities who just became pawns in our culture war."

Approximately $567 million of World Vision's more than $1 billion budget comes from private contributions, according to its 2012 annual report.

Some supporters took on additional sponsorships in support of the decision. Kristen Howerton, a professor of psychology for Vanguard University and popular blogger, organized a fundraiser with the goal of getting 100 children supported to help make up the difference. She accomplished her goal in a day.

She said she made the decision after seeing hundreds of comments on social media from people vowing to drop their support. "I think people's reactions have been pretty swift in condemning World Vision in placing them outside the fold of evangelical Christianity," she said.

Matthew Lee Anderson reflected on whether and how evangelicals should stop supporting World Vision financially. Esther Fleece reflected on her experience at Focus on the Family when TOM'S Shoes ended a partnership over Focus's stance on homosexuality.

"We can disagree with each other and still serve people in urgent need. The days of boycotting everything are over, but that doesn't mean Christian convictions are," she wrote for On Faith. "Correct theology is loving people, and no Bible-believing Christian is going to withhold service from a person in need who disagrees with his or her interpretation of Scripture."

John Huffman, who was a World Vision board member for 26 years, is a fervent supporter of the work Stearns has done. He told CT his "high point" on the board was hiring Stearns, and this was the first time the two men had disagreed. But Huffman called the previous decision to change the employment policy "unwise" on every front. "It lacks of wisdom in terms of biblical, theological, moral, cultural, and strategic implications to the organization," he said.

Strategically, it would have alienated many evangelicals, which make up the majority of World Vision supporters. Given that World Vision has kept such a strong evangelical identity, it's unlikely to attract people from the other side of the fence, said Huffman, who is [full disclosure] board chair for Christianity Today as well as Gordon-Conwell Theological Seminary.

Dearborn said that World Vision U.S.'s relationship with its partner organizations also played a role in today's decision. "There's an effort on the part of World Vision U.S. not only to be subject to the authority of Scripture, but also to be sensitive to being a member of an international partnership," he said. "There are 50-some World Visions in the world. Especially in Africa and Asia, the position World Vision just rescinded would have been troublesome."

Stearns reached out to those partners in World Vision's announcement of the reversal, asking for forgiveness:

We are writing to you our trusted partners and Christian leaders who have come to us in the spirit of Matthew 18 to express your concern in love and conviction. You share our desire to come together in the Body of Christ around our mission to serve the poorest of the poor. We have listened to you and want to say thank you and to humbly ask for your forgiveness.

Some critics were quick to extend it. "World Vision has done the right thing," tweeted Moore after the reversal. "Now, let's all work for a holistic gospel presence, addressing both temporal and eternal needs."

To Stanley Carlson-Thies, president of the Institutional Religious Freedom Alliance, World Vision's controversial decision was a good opportunity for similar organizations to consider their own stances.

"I think it's probably good that other organizations have to face that decision, because it's all around us," he told CT before the reversal. "I would hope that organizations use this as an opportunity to think about their own policy, not just follow the leader."

[Correction: An earlier version of this story stated the reversal letter was approved by the "entire" board. Stearns mispoke during a joint interview with reporters.]

Here is the full text of World Vision's announcement today: 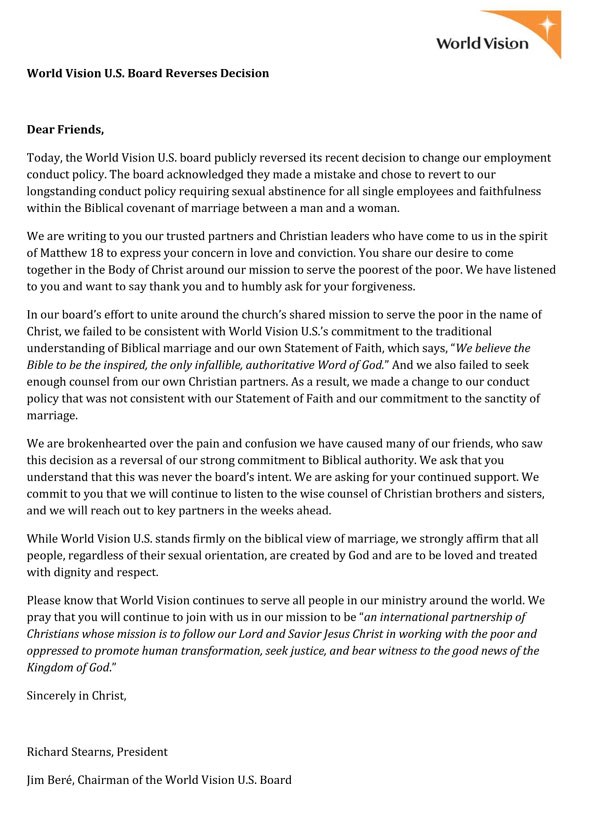