Watch Walt Disney's animated classic Sleeping Beauty today and the most shocking moment may well be when Maleficent, just prior to transforming herself into a dragon, openly invokes "all the powers of hell." That film was released in 1959, at a time when simply saying that a villain was evil was both a sufficient and satisfactory explanation for why she must be opposed and defeated.

Today villains need origin stories. Evil must have a psychological, sociological, or biological cause. Today, we reject the doctrine of original sin. Instead we preach that man is the measure of all things and is (at least individually) inherently good.

Yet in the last two centuries, while this secular doctrine has taken hold, we've been bombarded with daily reminders of how capable we are of doing works of great evil. We fall into the explaining by naming fallacy, calling perpetrators of such actions "ill." As though replacing the word "sinful" with "sick" somehow clears up the eternal mystery of how those born good became capable of doing so much bad.

Or we look for a trauma that turned the young and innocent into a warped vengeance seeker. The worse the traditional villains, the more horrible their trauma must have been to mitigate, if not excuse, their own immoral actions. When we constantly try to rehabilitate the reputation of villains, we're moving responsibility for evil away from the individual who does the evil, and onto the institutional and environmental factors we think made the human monsters who or what they are.

The logic behind those psychological explanations for evil is weak. It's possible to suffer greatly and not become a (mass) murderer. That is why even though these narratives offer us momentary satisfaction—we see our darker sides' surrogates exonerated—but they are rarely satisfying on a deeper level.

Maleficent's name literally means "harmfully malicious." In this new film, her shape-shifting crow is also given a name: Diaval. But don't expect either to conform to the labels put on them by fearful and suspicious men.

Truth is, Maleficent owes as much to Gregory Maguire's Wicked as it does to Disney's Sleeping Beauty. And I want to emphasize this: in principle, I have nothing against postmodern deconstructions of classic tales. When done well—and Maguire's novel is a poignant masterpiece—these sorts of reframed narratives make us pay attention to ideas that were often suppressed in the original stories. They point out the thin line separating entertainment and propaganda. A myth is, after all, a story with explanatory power, and it's in our nature for the privileged and powerful to promote those explanations that also justify a self-serving status quo.

But comparing Wicked and Maleficent points out the problem: Maleficent is really just an inversion of a fairy tale, not a deconstruction. In Wicked, Ephaba (The Wicked Witch of the West) actually does the things that mark her as a villain in the sources being deconstructed. The pathos comes from Maguire's understanding that the audience is capable of sympathizing with a person while still condemning her actions.

Maleficent doesn't have this sort of faith in its audience. Its commercials promise that we will now know the true story. The movie doesn't invite us to look at Sleeping Beauty from a different perspective; it just dismisses that original story as a lie and substitutes another story, in which the original victims are revealed to be the depraved ones and the original demon-witch is revealed as the fullest embodiment of true love. 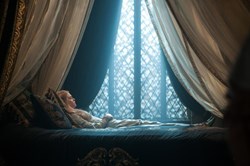 The opening narration tells of two kingdoms, the marshes populated by benevolent fairies and walking trees and a worldly kingdom filled with "folks like you and me." It's telling that in this setup, neither the marsh nor the human kingdom is said to be populated with a mix of good and bad souls. King Stefan is not supposed to be a singularly bad guy; he is representative of his race. As a child he has a rudimentary knowledge of right and wrong, but he is overcome by the "temptations of the human kingdom" and "the greed and envy of men." (The vision of man's nature and moral development here is much more Blakean than Biblical.)

Mix in a little political allegorizing—Stefan's father decides to wage a preemptive military campaign to strike down "a growing power in the moors"—and throw in a shockingly bungled rape metaphor, and the audience may start wishing that the powers of some supernatural entity would be invoked against someone. It's dark, dark stuff, with Stefan, the representative of power and patriarchy, every bit the monster that Maleficent was once thought to be.

It's always a dicey proposition to dramatically invert politically and socially conservative stories. But Maleficent suffers from particularly bad timing. Fresh off of one big Hollywood epic (Noah) in which demons were humanized and men were demonized, another Disney blockbuster (Frozen) that suggests all men are cads and true love only exists in sisterhood, and a series of dystopian fantasy franchises (Divergent, The Hunger Games, Star Trek: Into Darkness) that portray totalitarian governments labeling conscience-stricken truth seekers as terrorists, audiences may be more prone to recognize Maleficent's evil is good/good is evil trope as the stale regurgitation it really is.

Even so, much of this might have been mitigated if the movie was better. But it's hard to believe this movie had a reported $200 million budget. The screenplay needs another draft. The second act drags mightily. Even in the best circumstances, 3D tends to wash out the colors and make everything in a film look darker. In a horror or action film, that is annoying. But for those of us whose fondest memories of Sleeping Beauty are tied up in its stained glass color palette, the murky blue-grey haze that covers everything in Maleficent is a major disappointment.

Don't expect any nods to the Tchaikovsky inspired score of the Disney classic, either. Whereas that music helped make the animated feature moody and creepy, the modern score keeps hitting the same blaring emotive notes over and over again: attack, attack, attack.

Angelina Jolie is physically imposing, and that works to her advantage in films like Salt and Tomb Raider. Here she is so bound up in make up and costume that it seems hard for her to even move. Why sign an A-list Hollywood talent and then use her as a human CGI prop?

Despite all these misfires, I didn't give up on the film until very near the end. I kept hoping that all the clumsily executed changes to the beloved fairy tale would serve some thematic purpose—would deliver a some kind of positive message or indelible moment that justified the whole clunky enterprise. That moment almost came for me when a minor character was deposited in front of the unconscious princess and told to get busy. When he suggests that maybe there is something not quite right and proper about kissing a sixteen year-old girl you hardly know and who can't consent, it looks for a moment like the film has finally stumbled across some genuinely timely moral insight.

The lad's hesitation lasts all of ten seconds, though, and then the unspeakably fatuous pixies start cajoling him like a cross between tweeners at a Justin Bieber concert and drunken frat boys in a Judd Apatow comedy. Doesn't he believe in true love? Kiss her, already. Kiss her, kiss her, kiss her, kiss her! Maleficent earns an extra half star for letting the boy hesitate at all, but even in its best moments it still falls short.

It's a desolate summer in terms of movies for youngsters. So the temptation will be strong for parents to buy into the notion that Maleficent is good enough because it's not horrible. And I can already hear youth group leaders across the country prepping short talks on the true nature of "true love" to assure skeptical parents that movie night is an integral part of the modern adolescent's spiritual development.

Meanwhile, Godzilla is now a "Christ figure," Hannibal is the water-cooler television show of the moment, and Cruella de Vil is in development for 2015. I would say "resistance is futile," but I firmly expect a Star Trek: Next Generation reboot any day now to inform us that the Borg were just a well-meaning but misunderstood alien race.

I guess we'll always have Nazis, though.

Maleficent is rated PG. There are two effects-laden battle scenes between Maleficent and soldiers in and from the castle. These are loud, but they are essentially fantasy iterations of "shoot and fall" violence, lacking the more gory money shots (blood spurts, mangled corpses) that mark "R" and "PG-13" action films. There is a dragon that breathes fire, and the volume and frenzied editing of the fight scenes could be disturbing to younger viewers. One character falls to death from a great height, but we do not see or hear the moment of impact. A child walks off a cliff and is only saved at the last moment. One character awakes after being (probably drugged and) assaulted. While we are not shown the actual assault and technically it may not be sexual in nature, the implications of the scene could be particularly painful for those who have experienced the trauma of sexual assault or date rape.