The spectacular third feature from "Moneyball" and "Capote" director - but not a sports movie.
Alissa Wilkinson|November 13, 2014
Image: Sony Pictures Classics
Steve Carell and Channing Tatum in 'Foxcatcher'
Our Rating

Foxcatcher is not a sports movie—though it is about sports, training, underdogs, the Olympics, and winning. It is also not a "wrestling movie."

Basically, it is not what you expect. The protagonist isn't a world-class wrestler or even an eccentric heir: it's America. You’ll have to watch, or you might miss it.

The film is the true, strange story of 1984 Olympic gold medal wrestler Mark Schultz and billionaire John du Pont—or should I say John “Golden Eagle” du Pont, the ornithologist and wrestling coach and philatelist and explorer and philanthropist and the heir to his family’s fortune, built on supplying ammunition to the upstart American army during the Revolutionary War.

In 1987, Mark Schultz (Channing Tatum) is three years out from his win in Los Angeles and training for the World Championships with his brother Dave (Mark Ruffalo)—also an Olympic gold medalist and a bit of a golden boy. Older brother Dave is gregarious and principled and beloved by his wife and two children. He's also beloved of the elite wrestling community; though he doesn't compete much anymore, he's a coach, and Mark's training partner. During their tough childhood, Dave raised Mark, who also values patriotism, sportsmanship, training, and virtue: giving a talk to a mildly interested auditorium of elementary school children, he tells them about his medal and “the virtues it requires to attain it.”

But Mark's life is not like Dave's, and his brother's fame has eclipsed his own by a long shot. He only got the elementary school gig because Dave had to cancel, and he receives a $20 check for his effort. He lives in an apartment above a garage, ... 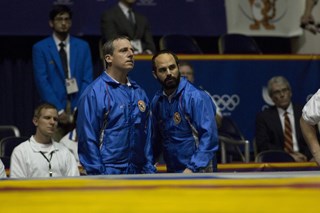