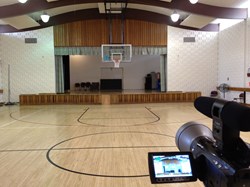 Led Zeppelin may or may not have played here.

Jeff Krulik’s Led Zeppelin Played Here attempts to discover the truth about a persistent legend that one of the band’s earliest performances was for a crowd of around two hundred at a youth center in Wheaton, Maryland. Krulik finds plenty of people who have heard about the concert and even a few who claimed to have attended. That none of their recollections exactly correspond make the mystery more tantalizing. Was the concert on the same night as Richard Nixon’s inauguration? Did the band perform as The New Yardbirds? The director even corners Zeppelin members at their Kennedy Center celebration to ask if they remember playing the gig. Even they can’t remember.

The quest for an answer provides a context for a delicious slice of Americana, as we get a glimpse into a pre-Internet age in which rock groups we now consider legendary played the strangest of venues. My favorite story regarded Alice Cooper performing at a community college in Northern Virginia . . . in the cafeteria! The film also acts as a case study for the vagaries of memory.

If Krulik had been more diligent about teasing out these two subtexts, the film would have been a home run. But even just waving at them as he doggedly pursued one lead after another was enough to make it fun, and fun documentaries are hard to come by.

Robert Greene’s Actress is not what I would call fun. The film is an intimate—at times uncomfortably intrusive—chronicle of Brandy Burre’s attempt to get back into acting after a years-long hiatus. I asked Greene if any of the footage was from installations or whether a cameraman was present at all times. He said the latter. In lesser hands such intimate footage might have been voyeuristic or titillating, particularly once Burre’s domestic partnership begins to unravel. Greene said, “I just wanted to put her on stage, shine a light on her and see all the contradictory, revelatory truths that would emerge.”

Since Actress was not a hidden camera film, one of the key questions it confronts the audience with is whether or not Burre ever stops playing for the camera. And if she didn’t, was that by choice or unconscious reflex?

I appreciated that the film was not particularly editorial. The fact that Greene did not ask Burre (or her partner, Tim) to sign a release until after the film was completed was an interesting gamble. It certainly appeared to have empowered the subject of the film in ways that don’t seem typical. That fact, of course, also complicates whatever generic sympathies we might feel for Burre as a representative of a class of fellow human beings—actors—who have been systematically divested from any real ability to have a private life once the camera stops rolling.

Greene’s last film, Fake it So Real, was about independent professional wrestlers. The two films can be linked in that they are both about people who perform for a living, and they both explore the ways in which the identity of the performers gets conflated with the roles (rather than the character) they play.

Actress may not have been a surveillance film, but it reveals something about our surveillance based infotainment culture. The more we break down the barriers between public and private, the more we internalize the sense that we are being watched—and hence need to perform.

1 of 2
Brandy Burre in 'Actress'Led Zeppelin may or may not have played here.