For a long time, every time a computer or something geeky appeared in a movie, it was either to show how evil the villain was (look, he has a machine that will take over the world), to be the villain itself (“I'm sorry, Dave, I'm afraid I can't do that”), or just plain gimmicky (you've got mail!). When digital tech was a point on which the plot turned (say, in a spy movie or sci-fi), everything moved so fast that the audience didn't have time to feel left out.

But smartphone-toting audiences are comfortable enough with their devices talking to them and giving them directions and ordering their food that creators are convinced they needn't mark it off with blinking red lights anymore. Computers are part of the background to life now, like refrigerators and cars. 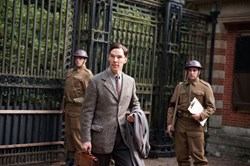 Benedict Cumberbatch in 'The Imitation Game'

So in 2010, we got The Social Network, which featured shots of hackathons and glimpses of Zuckerberg's PHP. More recently, the TV shows Silicon Valley and Halt and Catch Fire dramatized and skewered start-up culture. There was Her, in which the operating system played the romantic lead. And last year's The Fifth Estate took a look at Wikileaks. Though movie wasn't great, it did give laymen a pretty good idea of the technology that let Julian Assange pull all this off.

The best part of that movie (and, let's be honest, many movies) was Benedict Cumberbatch as Assange, and he's also the best part of The Imitation Game. Based on a book by Andrew Hodges and directed by Morten Tyldum, the movie tells the story of Alan Turing, the English mathematician and logician who helped crack the Nazis' Enigma code and win World War II.

I learned about Turing during a history course in college, but as inventor of the Turing Test, which tests a machine's ability to imitate and perhaps pass itself off as a human. But Turing was much more than that: he is the undisputed father of the computer itself, having invented the forerunner to our modern machines.

Among his best talents is Cumberbatch's knack for voice acting—the man is the voice of Smaug—and that's on clear display here, along with the mannerisms that mark out Turing as occupying some point on the autism spectrum, as so many of his brilliant heirs in the world of computers and software do. Cumberbatch's Turing swallows and chokes on his words, stutters when he's frustrated, smiles tautly but without malice, and then turns peaceful when he's with someone for whom he feels affection. He's a less sociopathic, more vulnerable version of Sherlock.

Young Alan tells his only friend at boarding school, for him, just talking to another person can be a lot like trying to figure out a code: what we say to one another is not often what we mean. For many people, picking up “the code” that helps them unlock social interactions is simple, coming to them as second nature. But for others (myself included), it takes time and work. It's like learning a game, deciphering the meaning behind the words. 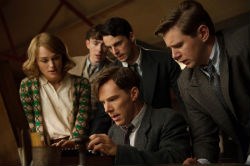 That theme of hunting for the code persists throughout the film, from Turing's overly-literal but innocent misreading of an interviewer's cues to the construction of his machine that will break Enigma, the code the Nazis used to send each other messages throughout the War. A roomful of cryptographers in England intercepted the messages and tried in vain to crack the code, but at midnight every night, the code would change.

Those cryptographers include “crossword puzzle enthusiasts,” as they put it, played by some fine actors, including Matthew Goode (who's currently on The Good Wife) and Allen Leech (Downton Abbey's Branson). The always-wonderful Mark Strong plays the MI-6 agent overseeing the Enigma-cracking operation headquartered at Bletchley Park. And Keira Knightly is Joan Clarke, one of the most talented cryptanalysts in Britain, if not the world. She was also, briefly, Turing's fiancee.

But it's a well-known historical fact that Turing was gay, in a time when homosexuality was illegal in Great Britain. He broke off the engagement with Clarke after deciding he couldn't go through with it, and in 1952, well after the end of the war, he was prosecuted for homosexual acts and given the option of either imprisonment or chemical castration. He chose the latter. In 1954, he died of cyanide poisoning, an apparent suicide (though that has lately been debated), just before his forty-first birthday. In 2009, Prime Minister Gordon Brown made a public apology; in 2013, he was granted a posthumous pardon by the Queen. It's estimated that his efforts helped shorten the war by two years.

Benedict Cumberbatch in 'The Imitation Game'

In the film, this is one more piece in the puzzle, a bit of code to help crack the enigma that is Turing. The film's framing device is a detective's investigation of Turing, whom he's certain has something to hide. (Just what it is, he wasn't quite expecting.)

Yet Turing remains a mystery, not just to others, but to himself. Near the end of the film, he asks an interlocutor to tell him what kind of a being he is: a man? a machine? a war hero? a criminal? Having lived a life bent under the weight of secrets he didn't ask to have to keep, official and otherwise, Turing's story plays like a tragedy.

The Imitation Game is not a terrific film, and at times it's maddeningly elusive for an audience who isn't scared off by the idea of computers—how does his machine work, we want to know, but all we see is some wires and a lot of knobs. It fails most when it tries to be inspirational: the line “Sometimes it's the people who no one imagines anything of who do the things no one can imagine” is a little corny but fine, the first time it pops up; by the third time, it's verging on eye-rolling.

But cracking codes and making computers doesn't make for scintillating, eye-popping theatrical experiences. So it's mostly to Cumberbatch's credit that The Imitation Game plays like a solid, engaging historical drama, interesting enough to suit audiences that aren't interested in either World War II history or technology. It leaves one wondering how many social frustrations and unkindnesses could be blunted if we recall that, as the saying goes, everyone we meet is fighting his own battles.

The film is rated PG-13 for some sexual references, mature themes, and historical smoking. There is no on-screen sex, nudity, or violence except a few punches thrown and historical black-and-white footage of World War II. One character tells a dirty joke at a party, and while the premise of the joke is told off-camera, it's pretty clear what it's about. Another character uses a direct anatomical reference to male genitalia. There's a smattering of profanities. Turing's homosexuality is discussed, particularly its illegality.

Alissa Wilkinson is Christianity Today’s chief film critic and assistant professor of English and humanities at The King’s College in New York City. She writes the “Watch This Way” blog and tweets @alissamarie.