Whether or not war is hell isn’t really an interesting question. The jury is back on that one: the answer is yes.

But why do (some) people voluntarily enter that hell? Why do some others survive when they have that hell thrust upon them? These are harder but—in some ways—more important questions.

Fury documents the transformation of one normal man (“Norman”) into a killing machine. Depending upon your point of view, Norman’s (Logan Lerman) change is either a painfully slow education (during which others pay with their lives for his mistakes and reservations) or a shockingly rapid degeneration. The man who originally asks for his own death rather than to be forced to kill an enemy eventually takes to violence with a cathartic energy that horrifies him and us alike.

The film echoes Lawrence of Arabia’s tragically sad admission that the hardest thing about killing a man is the realization that one enjoyed it. But it also houses another even more cruel conundrum: in war, the best chance of saving your life is surrendering your humanity.

For a while, Don “Wardaddy” Collier (Brad Pitt) fools Norman, and us, into thinking we can have it both ways. That we can hold on to decency, some sort of code—even one peculiar to war—and still execute with skill and efficiency the destruction of other human beings. Just as Norman, straight out of the typing pool, wants no part of the tank unit, Collier wants no part of Norman.

But Collier is a soldier following orders, so he can’t choose to leave Norman behind. When Norman is reluctant to kill—and it costs another man his life—Collier refuses to let him look away from the consequences. When even that is not enough, he commands Norman to execute a prisoner of war, literally restraining the fellow soldier and forcibly putting the gun in his hand.

The execution is a bravura scene, made all the more harrowing because each character’s internal logic is frightfully clear. The Fury tank may be killing Nazis, but the real antagonist is war itself. The Nazis can eventually be defeated; war looks and feels like a more invincible foe—at least so long as we live in a fallen world.

If that sounds too abstract, too much like liberal pacifist hand-wringing, let me add that much of Fury’s brilliance comes because it gives the pro-war arguments their due. Rarer still, it allows those who represent different philosophies recognize and empathize with each other. Too often the anti-violence pacifist fails to recognize or acknowledge the soldier’s nobility—and then we get Full Metal Jacket. Or in the rush to honor the military and defend the use of force, the artist and critic forgets that though pacifist ideals are inconvenient on the battlefield, they are a part of the civilization that the soldier is risking his life to preserve—and we get Team America: World Police.

Those aren’t necessarily bad films, but it is rare to see a war film embrace and embody ambiguity and doubt. Norman’s ideals are a threat to the company’s safety, and they are treated as such. (“You are no g*dd**n good to me unless you can kill Krauts.”) But Collier also recognizes that war has dehumanized his comrades and is—despite his best efforts—dehumanizing him. (“We’re not here for right and wrong; we’re here to kill Krauts.”) 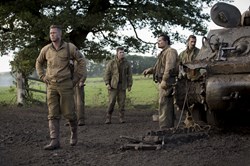 So though he is integral to Norman’s transformation, he does not find it satisfying. Part of him wants to preserve a slice of Norman’s innocence, even if it is more dangerous to himself, so that he knows he did not give up his own in vain.

How to reconcile these viewpoints in the film, then?

You could look at Collier in a few different ways. He could work as the symbol in which the film’s contradictory ideas about war are synthesized. He relentlessly interrogates an overtly religious fellow solider, asking, “Do you think Jesus loves Hitler?” But he also persists in saying grace before eating a makeshift meal. He doesn’t know how to make a theological argument for God in the face of war; he also doesn’t know how to live as though God is not there. And he certainly doesn’t know how to fight without the steel-clad conviction that he is unequivocally in the right and doing the Lord’s work.

You could also say that Collier (and the film) is simply a set of walking contradictions. It’s not politically correct to have a religious faith that the rightness of your cause justifies how you pursue that cause. And the Americans in Fury rape, pillage, and terrorize, all while insisting they hold the moral high ground. One great paradox of history is that those who think of themselves as God’s instruments have always been the ones who seem to be able to suppress and, at times, silence completely the voice of conscience.

Yet every time the film seems to veer close to grossly overplaying those parallels, to suggesting a cheap (and false) moral equivalence between soldiers and terrorists, it reminds us of the distinctions between them—maybe not in their actions, but in both how they are formed and whose political hands wield them to advance or preserve a way of life.

So Collier must both attract and repel us, to work as a character. We must see him as the embodiment of both our highest aspirations and deepest fears about human nature. Man was made in and reflects God’s image, but sin has left the best parts of our nature bent and tarnished.

Brad Pitt rises to the challenge of embodying such internal contradictions masterfully. Pitt is perhaps one of our most underrated movie stars; his polarizing persona can distract us from how immensely talented and consistent he is. He is highly gifted at using his voice and finding the rhythms and cadences of a character’s speech like few others. Late in the film, Norman confesses his fear of dying and contemplates surrendering—and Pitt’s delivery of the response is so sad, so gentle, so filled with humanity that it suggests facets of Collier’s personality that lesser actors wouldn’t even have found, much less known how to communicate. It really is a virtuoso performance from a master at the top of his craft. 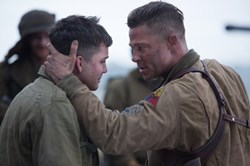 With all those good things going for it, how can the film not get four stars? Well, I wasn’t a big fan of the washed-out color scheme. And an interlude where Collier and Norman discover a pair of German women doesn’t work—plus its aftermath is bit too on the nose. Most of all, a pivotal decision at the beginning of the last act felt too forced and too self-consciously cinematic. I had not yet seen any hints from the characters that they could or would respond to that key decision in the way they do.

But those are analytical, left brain complaints. My emotions were deeply touched, particularly as a reminder that those we ask to go to war deserve our gratitude and respect—even when their response to the ideological anarchy that is combat challenges some of our own deepest assumptions about what is worth fighting for and what cost for victory is too steep.

Fury is rated R. It is a difficult film to watch (and listen to) at times. Not surprisingly, the swearing is pervasive; during combat scenes, nearly every sentence is punctuated with an obscenity. The war violence is shocking and horrific, both when we see it in real time and when we see its aftereffects. In perhaps the most gruesome scene, Norman is told to clean up the mess from a tank member being killed and finds part of the man’s face blown off on the bottom of the tank. We see one man catch fire and shoot himself in the head while he is burning alive. We see several people shot at point blank range. We see hanging corpses of those who have been murdered by the SS for refusing to fight. The members of the tank crew rape German women after taking over a town. (I probably shouldn’t have to make the argument that the central encounter between Norman and a young German woman is rape, but just in case I do, I would stress that Collier tells Norman that he will take the woman if Norman does not. That Norman’s execution is less crude and more gentle than some of his mates’ doesn’t alter the fact that he is a conqueror and her consent is immaterial.)

Fury may, in fact, be unwatchable for those who disqualify themselves from seeing or hearing certain content. But it’s worth saying that content is not just an unavoidable part of the movie; it is, in some ways the movie’s point. To have a war movie that was rated “G” would be to lie about what war was. I can understand those who would elect not to see it; what I would have a harder time understanding would be those who wished it were other than what it is.