However. If you haven’t read the book and won’t see the movie and want to know a bit more, or if you’ve read the book already and know the outlines, or if you don’t mind intimations about the moral character of some of the, well, characters, read on. 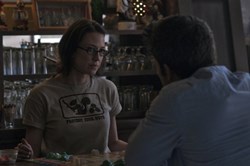 Chief among the movie’s charms is Rosamund Pike (you saw her in The World’s End last year), who I’d say is the only source of light in this movie because she glows from within, except—well. She has wonderfully apt co-stars in Affleck and Coon and Neil Patrick Harris and Tyler Perry—Affleck has most of the screen time and completely won me over—but this is Pike’s movie from start to end.

Given her luminescence, you might be excused for thinking Pike sold her soul to the devil to become Grace Kelly reincarnate. And that’s where things get interesting, because Fincher is absolutely channeling Alfred Hitchcock (or at least some noir director). Nick and Amy talk to one another, noticeably, like characters in a much older movie: smooth, articulate, long sentences, no hesitations. They live a sleek and lovely life; they have a Hollywood meeting. They are, in a word, unreal—imported from some other era, placed into a world where they sort of belong.

A fair amount of the classic noir (as distinct from neo-noir) that your average moviegoer is likely to have seen was made under the Production Code. Fincher, having no such strictures, went for the jugular on this one: violence is not implied, and neither is sex, though the actual scariest scene has neither.

But to further explore the idea of Gone Girl as noir, I call in Roger Ebert as my guide, who in 1995 wrote a nice little “guide to film noir genre.” In it we find things that match Gone Girl quite nicely.

For instance, point 2: A movie which at no time misleads you into thinking there is going to be a happy ending. (No spoiler: this is not a happy ending—or rather, if you think it is, you are more messed up than the movie.) 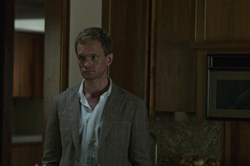 Point 3: Locations that reek of the night, of shadows, of alleys, of the back doors of fancy places, of apartment buildings with a high turnover rate, of taxi drivers and bartenders who have seen it all. Most notably here, Nick and Amy live in a gorgeous home, palatial to displaced New Yorkers (take a New Yorker’s word for it), that they get because it’s been foreclosed, as many similar houses have been around the country.

Point 5: Women who would just as soon kill you as love you, and vice versa. Yes. (Although, notably: Nick’s sister Margot is the shining beacon of actual decency and the moral compass of the whole enterprise.)

Points 6-7, regarding appearance: Amy never appears in a floppy dress or dates a gangster, but she is the definition of sophisticated Manhattanite. Nick wears a suit maybe twice, but importantly, he’s full of surprises.

Point 9: Relationships in which love is only the final flop card in the poker game of death.

But here is the most important bit—Ebert’s point 10 says this: The most American film genre, because no society could have created a world so filled with doom, fate, fear, and betrayal, unless it were essentially naïve and optimistic. 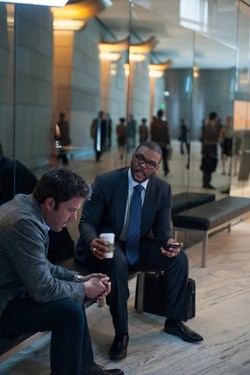 Gone Girl is profoundly American, not just because it’s rooted in the aftermath of a national falling-out. The recession, and the deception behind it, is the clear background to the story. Lots and lots of people were duped into buying houses they couldn’t afford to keep up appearances mandated by an American dream, the “cool girl,” as it were, of grown-up dreams, the one that you can’t let go of, the one you have to maintain. The results were deadly. We’re still paying for our optimism.

With that said, then, here is the oddest thing about Gone Girl: it is, as Fincher has said in some interviews, actually a comedy, but a comedy in a noir mode. It is sometimes funny, but that’s not really what I mean. It’s like someone took a comedy and flipped the negative.

A comedy (and this is coming from the ancients) is a story of a rise in fortune of a sympathetic central character. Stuff gets better, eventually. It could be funny, but the main point is that in contrast to a tragedy, things might get bad for the protagonist, but by the end, they will get better.

Well, I’m not totally sure who the protagonist of Gone Girl is. We have two options, and both jump back and forth from sympathetic to not and back again. But the genius of this story is that things do get better for the protagonist(s). Sort of. Things are restored to a sort of order. They are, in fact, better from the outside.

Which underlines that Gone Girl is actually about something very modern and relatable: the difference between the images of ourselves that we project, and the people we actually are. That’s true whether we’re meeting a new person, or walking outside the doors of our house, or appearing on television, or going on Facebook, or whatever.

So if you’re going to look at Gone Girl as pessimistic—and it is, oh, man is it pessimistic—think of it this way: this is a story about how the hyperreality of images and aesthetics that we project as our actual selves can, without warning, eat us alive. I wish I could explain this more here, but you’ll know what I mean if you know the story.

This is especially apt for a noir film, because when we say a film is “a noir,” we’re talking as much or more about how the film looks (dark) and its mood (bleak and pessimistic) as we are about its actual plot.

One other thing. Some people have been saying that Gone Girl is a movie about modern marriage, possibly because it actually says it is near the end. But this is not a movie about modern marriage at all; it is about surfaces and images that we project to one another, but it’s a farce, a movie that takes our silliest ideas about what constitutes a marriage and slams them against the wall repeatedly till they go insane. There’s a lot that’s wrong with a lot of marriages, and plenty to criticize about how we approach marriage. 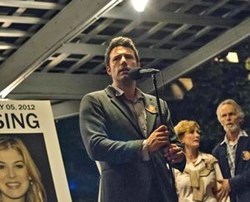 But seriously: this movie does not take place in our universe, or at least, it stops being our universe when they walk through the door of their house. It is, if anything, about one truly messed-up marriage that is so messed up not because of ordinary human flaws, but something like psychosis, maybe.

Okay. If you are brave and a little hardened and don’t mind the blood—if you still want to see the movie now—go do so, because this is some great movie-making, and will land high on the list of Fincher’s movies. I am personally a bit of a Fincher superfan; I have an unreasonably passionate emotional attachment to several of his films, Fight Club in particular, and pound for pound I’ve probably rewatched more of his movies than any other director. (Zodiac and The Social Network are, I think, among the finest films of their decade, and House of Cards!) If you, too, are a superfan, then you’ll like Gone Girl.

Weak stomach at all? Steer clear. Gone Girl features one of the single most bloody murder scenes I’ve ever seen, which is nevertheless almost exactly the sort of thing Hitchcock would have done if he hadn’t had the Production Code to deal with. And it happens during a sex scene in which we briefly (very, very briefly) catch a glimpse of a man’s genitals. There’s also another (very, very brief) glimpse of a different man’s genitals. Both are so brief that a lot of critics missed it the first time around. Another woman removes her shirt and we see her breasts in the dark.

And there’s plenty of violence: a brief, violent spasm of domestic abuse (though how literal it is isn’t clear); punches thrown, etc. Lots of f-words and c-words and other profanities. Unmarried and to-others-married characters have sex. Characters talk about rape, and one is simulated. Several scenes of self-inflicted harm that go a tad beyond just wince-inducing. A grownup has an affair with a only-recently-legal girl. There’s a brief intimation that siblings may have had “carnal relations.”

And honestly, if you haven’t caught on by now: the premise is flat-out creepy. Make sure you’re game for that before you see it.

Alissa Wilkinson is Christianity Today’s chief film critic and an assistant professor of English and humanities at The King’s College in New York City. She blogs for CT at Watch This Way and tweets @alissamarie.