Like watching the All-Star game: nobody cares who wins.
Kenneth R. Morefield|October 10, 2014
Image: Warner Bros.
Robert Duvall in 'The Judge'
Our Rating

Watching The Judge is a bit like watching two world-class athletes square off in a meaningless exhibition game. There’s the occasional flash of brilliance, and the fun of watching it. Ultimately, though, you know they could each sink five half-court shots in a row and none would have quite the same impact as a simple lay up in a game that actually counted.

All that to say that you can divorce skill from context and still appreciate the skill, but you can’t do the same for dramatic impact.

The context here is that Hank Palmer (Downey) is a hotshot lawyer who claims he doesn’t care that his clients are always guilty. “Innocent people can’t afford me,” he quips. When he gets a call that his mother has died, he pauses just long enough to explain to his adorable daughter that he no longer speaks to her grandpa and to tell his philandering wife that he would just as soon never speak to her again either.

Hank’s arrival in small-town Indiana is met with the requisite mix of strained politeness and casual disdain that foreshadows a dysfunctional family backstory more blatantly than Chekhov’s rifle signals an imminent murder. Sure enough, Hank doesn’t make it out of town before being called to the police station by his older brother (D’Onfrio). The police have circumstantial evidence that the car their father Joseph Palmer (Duvall) was driving hit and killed a man. The elder Palmer, the eponymous magistrate, experienced a chemotherapy induced “time loss” and he can’t remember what happened. He is too stubborn and principled to avail himself of his son’s slick lawyering moves to get away with murder on a technicality, yet Hank sticks around—and ... 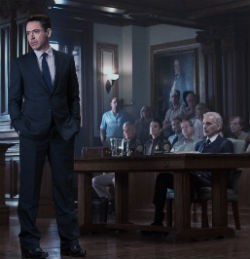