It’s an updated reverse-role American Beauty—at least, that’s what I was led to believe for the first half-hour.

If there’s anything I remember from college American history classes, it’s the image attached to the idea of “everydayness”—white-picket-fence families taking comfort in conformity, relying on a cycle of working, eating, sleeping, saving (think Walker Percy’s The Moviegoer), and secretly suffering from a lack of substance. It’s a much-seen setting of the 50’s and 90’s, and it makes for great angst-ridden movies like American Beauty, the 1999 film about a comatose Kevin Spacey awakening from this cycle, triggered by his fascination with a cheerleader. Narrating from beyond the grave (as he explains at the film’s start), he can see the dissatisfaction, nervousness, and disillusionment of his daughter and wife.

Also, they literally have white picket fence around their secretly imperfect home.

Now imagine that American Beauty was rendered through the eyes of Spacey’s self-centered teenaged daughter. We’d probably see things only as they affected her, and the end would come as the shock it was not meant to be.

While Kat (Shailene Woodley) is almost nothing like Lester Burnam’s daughter, she does give us a familiar description of life at beginning of White Bird In A Blizzard (based on the novel by Laura Kasischke): “We’re pretending we’re this perfect little family living this perfect little life.” It’s also 1988.

What follows after the first bits should have been, by all appearances, another story of disillusionment and restlessness bred by everydayness. But whether or not you look ... 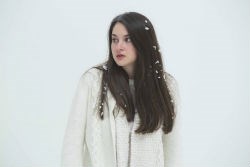