All the lonely people, though not enough of either of them.
Alissa Wilkinson|September 12, 2014
Image: The Weinstein Company
James McAvoy and Jessica Chastain in 'The Disappearance of Eleanor Rigby: Them'
Our Rating

Let me explain the title: this movie was originally screened at last year's Toronto International Film Festival as two separate, full-length films: The Disappearance of Eleanor Rigby: Him and The Disappearance of Eleanor Rigby: Her, each of which showed the story from one of the characters’ perspectives. When Harvey Weinstein got interested in distributing the film, he had it cut into one movie—Them—and that's the version most people will probably see.

All three films are about a marriage gone sour, but not in a way that lends itself to being one partner’s “fault” so much as the fault of the universe or, for some people, God. It is a story of grief.

Eleanor Rigby—named after her parents failed to see the Beatles but met one another—leaves her husband, Conor (James McAvoy), after calmly leaping off a bridge into the East River. Returning home to live with her parents, Eleanor chafes against being observed by her family (and not surprisingly: her father is a college professor and a psychologist). Meanwhile, Conor is back in New York City, trying to save his marriage and his tiny, failing restaurant.

The film (this version anyhow) wants to be about identity, and what happens when the things that propped yours up get stripped away. Eleanor—who has spent her life explaining her name—enrolls in a class on identity theory at Cooper Union, taught by a tough, warm professor who becomes a friend (Viola Davis); Conor flees their apartment to move back in with his father temporarily and wonders if he wants to fill his shoes; Eleanor’s mother (Isabelle Huppert) tells her in so many words that Eleanor’s personal tragedies could function as an escape ... 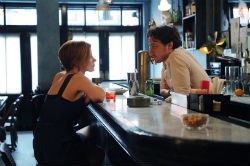