One kind of crime story sticks to the crime, sometimes straying into comedy (the Oceans films, for instance) or horror. But another sort fills the slot that larger, cosmic myths used to fill: they seek the origins of good and evil and plumb the shoals of redemption and damnation.

The Drop (along with other stories by Dennis Lehane, like Shutter Island, Gone Baby Gone, and Mystic River) is of the second type. People (mostly men) do bad, even reprehensible, definitely irreversible things. And then they suffer the consequences, which are less about punishment than psychological self-torture.

Two such men are at the center of The Drop: Bob (Tom Hardy) and Cousin Marv (James Gandolfini, in his last role). Cousin Marv owns a bar called "Cousin Marv's Bar" in Brooklyn, or at least he did until a few years ago, when the mob came knocking and he caved. Now he just looks like he owns the bar, though he's functionally just the manager, and he lives with his sister and watches his life pass by.

Bob tends bar - he is, in fact, Cousin Marv's actual cousin, though everyone calls him that - and seems to have a pretty quiet life otherwise. He lives in the house he grew up in, both his parents having died. The bar is sometimes the designated "drop bar" for all the under-the-table transactions that go on around the city; he takes care of that when necessary. He gives the old lady at the end of the bar free drinks and takes the ribbings the regulars give him. He (literally) saves a puppy he finds beaten and abandoned in a trash can, cleans its wounds, names it for a saint, and adopts it.

He also goes to 8am mass every day. But he doesn't take the Eucharist.

That's only the clue that there's ... 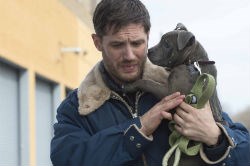