How to muddle a promising historical adaptation: a mini-masterclass.
Alissa Wilkinson|April 18, 2015
Image: Lionsgate
Noomi Rapace and Tom Hardy in 'Child 44'
Our Rating

There can be no murder in paradise, characters in Child 44 repeat at about twenty-minute intervals. The statement expands every time another person says it, indicating by turns their ignorance, brainwashing, or insurrection. 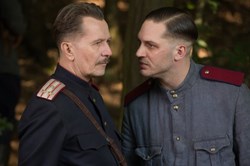 That's because the film (based on the novel by Tom Rob Smith) is set in the USSR during Stalin's reign of terror, and murderers lurk around the corner and in the highest echelons of government. The story follows Leo Demidov (Tom Hardy), war hero turned agent turned low-level enemy of the state and back again, as he investigates an apparent string of murders of children deemed “accidental” by authorities.

In the meantime, his relationship with his beautiful wife Raisa (Noomi Rapace) gets complicated when she reveals that their marriage isn't all he thought it was. But the murders keep happening, and the two of them are drawn into a partnership that puts them in danger.

It's hard to adapt a historical novel into a feature-length film; doing so successfully usually requires finding the soul of the story and then streamlining the action so it all points to the plot, stripping out B- and C-level plots that don't tie into the movie's biggest theme. Child 44 proclaims its theme from the start, in the movie's epigraph (yes, “there can be no murder in paradise”), but starts adding others, most notably Demidov's orphaned past and his struggle to locate a real father, which feeds, presumably, his desire to find out who is killing children.

There's also some critique of a regime that controls and reshapes truth through coercion. Also something about the beauty of nature versus the ugliness of forced labor. And then it jumps timelines, and cities and, frankly, it all gets pretty hard to track with, even though Hardy and Rapace are working mightily to keep the train on the rails.

The fact that Child 44 has no idea what it's doing crystallizes in a climactic fight scene taking place in a muddy ditch. The mud quickly obscures who's who, and there are knives and guns and guys with Really Big Muscles grappling in an environment where the usual rules of physics have been upended. That could have made for a fantastically tense, disorienting experience that mimics the characters' own disorientation (in the tradition of Viggo Mortensen's terrifying shower fight scene in David Cronenberg's Eastern Promises). 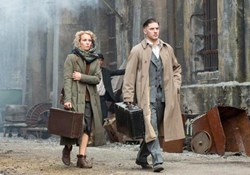 But the film doesn't trust you to get how tense and scary this is meant to be, and elects to layer in really conventional musical cues that could be lifted from any run-of-the-mill network procedural. In the middle, I plugged my ears briefly to see, and my hunch was correct: without the music telling you how to feel, all the uncertainty and visceral terror comes right to the surface. With the soundtrack, it's just another fight scene.

Child 44 has the raw materials—particularly in its cast and production design, not to mention its compelling mashup of real history, war, and serial killer drama—to have been a great film. Aside from those promising plot devices, it seems wise to remind people of the dire consequences of ideological regimes. (The film is not being shown in Russia, which may be telling.)

There's even a “redemptive” ending, of sorts, and the promise of a new start for the survivors. But in the end, the film lacks an imagination, and that unfortunately winds up dragging it through the mud.

Though the film is set in the USSR, it uses English-speaking actors with heavy accents, so none of the profanities—and there are a bunch, particularly f-bombs used as adjectives—are obscured. There is a brief, non-graphic scene of a married couple having sex in a bed. Lots of violence, some of it hard to watch, especially hand-to-hand combat with and without guns and knives. Political prisoners are hauled away and shot at point-blank range. Also, the cruel reign of Stalin is evident everywhere, and disturbing.

Alissa Wilkinson is CT's chief film critic and an assistant professor of English and humanities at The King's College in New York City. She tweets @alissamarie.