Film is a visual medium, but ‘Best of Enemies’ and ‘BaddDDD Sonia Sanchez’ bear witness to the power of the spoken word.
Kenneth R. Morefield|April 14, 2015

“You keep saying you were always there / waiting for me to see you.”
Sonia Sanchez, “Poem No. 10”

In 1968, ABC News, mired in third place, made the bold or desperate move to eschew gavel-to-gavel coverage of the Republican and Democratic nominating conventions. The network instead featured ten “debates” between William F. Buckley, Jr., conservative kingmaker and editor of The National Review, and Gore Vidal, liberal emblem and author of Myra Breckinridge.

By the time the debates were done, one participant was so shaken by the hateful words that escaped his own lips that he penned an essay in Esquire trying to explain how he could be brought to call his adversary a “queer” and threaten to punch him “in the g****mn face.”

The other was so embittered by his opponent that he sat for years on an obituary, which he published at his adversary’s death. Its concluding section began with a prayer that his opponent would “rest in hell” along with all the people he served in life.

Morgan Neville’s and Robert Gordon’s entertaining yet disturbing Best of Enemies chronicles the debates and the lives of the participants who reportedly both loathed and feared one another. By the film’s testimony, Vidal and Buckley each thought the other not only wrong, but dangerous. That fear apparently fueled a set of debates so vitriolic, so filled with personal animosity and professional arrogance, that destroying each other apparently became more important to the icons than advocating for their own beliefs.

The film uses generous amounts of archival footage to show the principals in action. It also includes reflections from contemporary media scholars and participants about how political and social discourse has changed since nineteen sixty-eight. (It does not feature interviews with the subjects. Gordon told reporters that they interviewed Vidal before he passed away but that the footage was unusable. He openly wondered if Vidal’s “paranoia” that the documentarians were secretly “Buckleyites” led him to sabotage the interview.)

Best of Enemies is always fun to watch, but as with so much modern debate, once the thrill of seeing the avatar of the opposition brought low fades, a kind of shame lingers. Hateful rhetoric has a corrosive effect not just on those who spout it but also on those who consume it . . . and certainly on those who egg it on.

While conducting interviews in the festival press lounge, Gordon insisted that the message of the film was that networks should trust their audiences and that he longed for “real dialogue.” Certainly the film contrasts the sixty-eight debates with the shrill pontificating of today’s cable demagogues.

But there is a difference between debate and dialogue, between rhetoric that is erudite and rhetoric that is substantive. When I pressed Gordon on this point, he conceded that there were ways in which the debates were precursors to the contemporary argument culture rather than stark contrasts to it. The incivility of the discourse was, he suspects, what the networks saw as the primary reason for the ratings bonanza and was, hence, the part they most sought to replicate.

He insisted, though, that the bygone era had more room for the “public intellectual” than we have today. When was the last time we heard a political commentator quote Pericles, he asked? 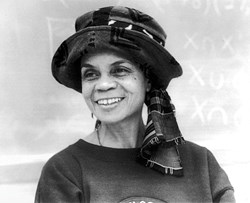 BaddDDD Sonia Sanchez had its world premiere at Full Frame, and it also featured a public intellectual, a master wordsmith, and a cultural icon capable of inducing awe, admiration, and fear in equal measures. Part biography, part art-process documentary, part performance piece, the film succeeds on nearly every level. It paints a picture of a woman as complex as the times she chronicled and arguably as influential in her medium as Buckley or Vidal were in theirs.

If you don’t know her name, if Sanchez never achieved the same level of mainstream celebrity as white poets or male political activists, you’ve nevertheless most likely heard poets and performers who cite her as an influence.

But besides her gravitas and cultural impact, Sanchez apparently has a greater capacity for self-reflection than Buckley or Vidal evidenced in Best of Enemies. In describing the moment she stumbled across Schaumburg Library, she wryly recalls her youthful hubris when told it was an archive dedicated to Black writers: there must not be too many books then, she replied.

When the librarian gave her copies of Up From Slavery, The Souls of Black Folks and Zora Neale Hurston’s Their Eyes Were Watching God, she wept. Upon sampling the Black dialect in the latter she asked herself, “How could I be an educated woman and not have read this book?”

At the beginning of the film Sanchez answers the question, “Why do you write?” by saying that she “wanted to let people know how I became this woman with razor blades between her teeth.” That metaphor is repeated, and the themes of chewing, scraping, and spitting out (as opposed to digesting) recur in her poems.

Some of that work is admittedly shocking to white ears—particularly those not attached to teeth that have not had to chew on the injustices Sanchez and her generation of Black Art Theater artists have been force fed. Yet while the words sometimes sting, they never seem to be used as weapons. Even when one poem repeats over and over than mantra of “white mother f***er,” it eventually concludes with “now that’s all said, let’s get to work.”

Does anger sometimes need to be spoken before it can be released? Possibly. But even in such circumstances, Sanchez’s poem deftly reminds us that spouting anger is both an insufficient and unproductive reply to injustice. Anyone can drop words like bombs to tear down indiscriminately. Using words productively is work, and Sanchez’s ultimate goal is, she hopes, “to bring people together.”

As a current professor and lifelong student of literature, one of my greatest pleasures in the film was the way Sanchez honored her teacher and mentor Louise Bogan. One principle that Bogan instilled in Sanchez was a belief those who seriously aspire to be poets must learn and practice its forms before daring to try free verse. Sanchez defends Hip-Hop as a genre, but she also makes her students write villanelles.

The day before screening the BaddDDD Sonia Sanchez, I happened to run into co-director Sabrina Schmidt Gordon in the festival’s hospitality suite. I told her how excited I was to see the film, and listened to her swap stories with King Georges director Erika Frankel. (Dis)honesty director Yael Melamede walked through the lounge and waved right after we had been discussing how much we liked her film. Then SXSW Documentary Award winners Scott Christopherson and Brad Barber (Peace Officer) said hello to me on their way to screen a film.

For just a second, I had a realization of intense joy. There we were—Black, White, Jew, Christian, male, female, artists, and critic, united by our love of the medium of film and the challenges of using it to document the near-infinite richness of the human experience.

There are bigger, more prestigious film festivals, but Full Frame will always be my favorite. Because words will never be perfect, but when they proceed from the heart of love, their power to bind us together is ultimately stronger than their ability to rip us apart.