Less than a year ago, director Alejandro González Iñárritu won three Academy Awards (best picture, best directing and best original screenplay) for Birdman, a comedy that signaled a potentially more lighthearted new direction for a filmmaker known for rather bleak films about human suffering. Iñárritu’s first three films, after all, comprised what came to be known as the “Death Trilogy”: Amores Perros (2000), 21 Grams (2003) and Babel (2006). His fourth and least acclaimed film, Biutiful (2011), was criticized for being a “spectacle of unrelieved misery” and an “oppressive 150-minute dirge.”

Iñárritu’s latest film doesn’t quite revert to the miserablist depths of his earlier films, but it is certainly no breezy Birdman. No, The Revenant (in theaters on Christmas Day) is stark, bleak and punishing for most of its 156 minutes. 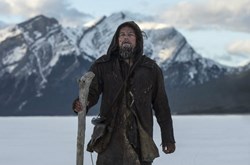 Inspired by the true survival story of 1820s frontiersman Hugh Glass (Leonardo DiCaprio), the film picks up Iñárritu’s familiar explorations of visceral portraits of emotional and physical suffering, this time set in the snowy wilds of the American west. Shot in 100% natural light and freezing temperatures by Oscar-winning cinematographer Emmanuel Lubezki, The Revenant may be Iñárritu’s most beautiful film; its scenic sublimity provides crucial catharsis for the film’s relentlessly harrowing story.

Among other things, the film explores the morality of revenge and eye-for-an-eye justice, presenting an alternate view to other Hollywood takes on the subject (including the films of another director debuting a violent western on Christmas Day).

Raised Catholic and no stranger to suffering (he and his wife lost a son two days after his birth), Iñárritu is a filmmaker with deep empathy for people and a profound understanding of the prisons of pain they can languish within.

CT had a chance to speak with Iñárritu about God, revenge, suffering, and spirituality in The Revenant.

Christianity Today: The Revenant strikes me as almost a post-apocalyptic film, where God has sort of left the building and left humanity to destroy each other and fight to survive in a Darwinian, brutal way. And yet God does show up in various places in the film: in the ruins of churches, in images of Jesus and crosses. Where do you think God’s presence or absence is most evident in the film?

Alejandro Gonzalez Iñárritu: I think that honestly God is around every moment, in nature and in those beautiful landscapes. We shot at the end of the day every day, at dusk time, which I always say is the time when God speaks. And we have to listen. Every object speaks . . . every plant and every shine in the snow, every tree are like soldiers of this planet. Everything is totally revealed in another level, another dimension. These men were absolutely surrounded by it, but they couldn’t see it. There was a lot of ignorance, a lot of illiterate, young, poor guys who were basically surviving a lot of threats. And between them there was never an understanding but there was a lot of prejudice… And they got kind of lost. Very sadly, that’s kind of the planted seeds of the world we are living now. We are blinded. But I think the beauty of existence is all around all of them, all the time.

CT: There is a real beauty to the film; the way it’s shot, the artistry of nature. It reminded me of Romanticism’s idea of the sublime being the sort of simultaneous beauty and terror of nature. Was this sense of a sublime, almost spiritual encounter with nature something you wanted to explore in the The Revenant? 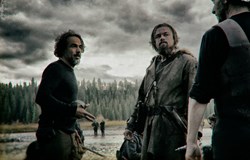 Alejandro González Iñárritu directs Leonardo DiCaprio on the set of 'The Revenant.'

AGI: I think for me it was the journey of Hugh Glass, building on the true fact that he was attacked by a bear, almost killed, abandoned and then had to survive 200 miles in the big winter. Which is a very difficult experience. For me the most important thing was to explore the emotional reasons and the spiritual dimensions of what this journey was for him. When you’re surrounded by nature at all times, the nature that is exterior to you is shaping you to become another organism. So the permanence of nature and how it shapes our body and our mind and our soul… that is what I was interested to know and to explore in this film. So yeah, there is a very physical level in this film but there is another spiritual dimension that is very clear.

CT: I know you grew up Catholic. How do you think that weaves its way into your perspective as a filmmaker?

AGI: I was raised Catholic. My mother practiced. My father did not. But I’m sure that it has a huge impact on me. Your childhood is your nation. I try, when I write or direct or in all the things I do, I do it on a subconscious level or instinctual level because that’s the way we are created to work. It cannot be rationalized. You rationalize things and they die, creatively. So the sources are very deep and very mysterious. You never know quite where things come from, and I don’t need to know. But I’m sure if I had been raised Buddhist or Islamic, I would be different. And so obviously the way you are raised, in one way or another, has an impact on the things that you do.

CT: In Christianity there is this idea that through suffering we can become more spiritually mature. And this seems to be a theme of The Revenant, where the visceral experience of pain has almost a purifying, enlightening quality. Was this an idea you wanted to explore in the film: suffering as a way to spiritually grow?

AGI: My theory is that life is a relentless number of losses that we suffer. From when we’re born to when we die, we are losing. We are losing our innocence. We start losing our hair, our teeth, our health, and then we lose our life. For me, it’s about how you deal with that, how you transform pain. Because I think pain should not be enjoyed, but pain is something you can transform. It’s a way to remain connected with things. This is how nature works. The flower grows and blooms, then dries and dies, and is born again. It’s constant part of life.

One theme of the film is Hugh Glass remembering who he was and what he lost. The heart of the film is a love story, with a Pawnee woman that [Glass] loved. He crossed any boundary of racial issues and prejudice and loved her, and he loved his son. And he is remembering what he loved. I think our life is that: the remembering of members. We are losing members of our selves. We lose members of our family or members of our knowledge. Then we have to remember, stitching again our parts together, recovering the members that we have lost. For me this is kind of the story of Hugh Glass.

CT: One thing I thought was interesting in the film is the way that Hugh Glass is paralleled with the bear. Of course his encounter with the bear is a key moment in the plot, but both he and the bear have protective instincts with their offspring. They both will do almost anything to survive. They both eat fish straight from mountain rivers. But one thing the bear won’t do is seek revenge. Is the revenge motivation something that makes humans distinct from animals?

AGI: I think it’s undeniable that revenge is part of human nature. We all have it. We all feel it. My problem with revenge is that I personally feel that it is an unwholesome emotion. And in a way the story shows that it is not very practical. The question I wanted to explore in the film was whether revenge is hollow. If someone’s whole meaning in life is about revenge, then once it is accomplished, what is the meaning of life then? What is after revenge? It leaves you empty and, most importantly as the character finds in the end, does successful revenge bring you back what is lost? Probably not. And that’s the thing. I think that in the world we are living in, I think the only way to stop the cycle of hell is to forgive. There’s no other way!

There’s a Chinese poem or saying that says, once you start the journey of revenge, start digging two graves: one for you and one for the enemy. Because it’s true. Nobody will win. And I feel that is timely now, not only with the violence in the news but also in entertainment where violence is often exploited as a cool thing. To suggest that the hero who does revenge lives happily ever after… I really question that. I think this film portrays revenge in a different way, which is that violence has a huge consequence, no matter what. And normally painful. Revenge can be a tricky journey for anyone.

CT: It does seem like The Revenant is timely in our world today, with the revenge motivation in war and terrorism, going back and forth in this cyclical pattern of violence and brutality. Was the state of our world today a motivator for you in making this film now?

AGI: When I started reading about the social and political contexts and the circumstances of the time when The Revenant is set, I was shocked to see how relevant and resonant it was to our world today. They were the planted seeds of the kind of world we are living in now. These guys trapped everything in nature without any conscience, they killed every animal, they cut every tree, they impacted badly every community . . . in the name of profit. They couldn’t see, they couldn’t understand the Otherness. It was a very, very difficult time, but it’s not very different from today’s world. We keep repeating the same mistakes.

Brett McCracken’s review of The Revenant will run on Thursday.