Survey: Two in three evangelicals were attending monthly or more at the time of their first abortion.
November 23, 2015
Image: Shutterstock

On behalf of Care Net, a national network of crisis pregnancy centers, LifeWay Research surveyed more than 1,000 American women who have terminated one or more of their pregnancies.

Here’s what evangelicals and churchgoers, defined as those attending church once a month or more, as well as all women who have had abortions, said: 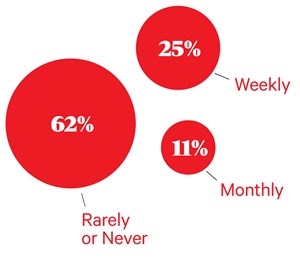 2 in 3 evangelicals were attending monthly or more. [Note: "Evangelicals" based on self-identification.]

Both churchgoers and non-churchgoers equally reported receiving or expecting reactions from local churches that were "judgmental" (1 in 3) or "condemning" (1 in 4).

Still, less than one-third of churchgoers said they received or expected such positive reactions from their local church.

In the Secret, Quiet Place 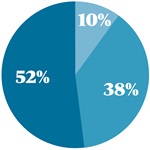 Who Churchgoers Were Most Likely to Consult 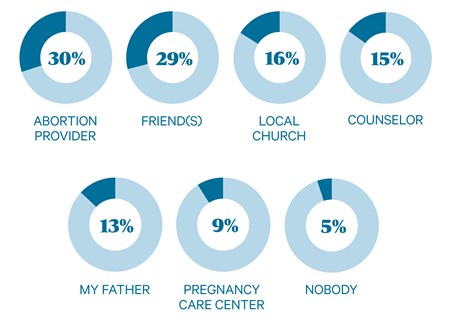 Who Was Most Influential on Decision to Abort:

Influence of the Local Church

Those who said local churches had "no influence" on their decision to terminate their pregnancy:

[Note: Based on self-identification. "Protestants" include those who said "nondenominational."]

Women Who Have Aborted Believe That:

It is safe to talk with a local pastor about abortion.

Pastors are sensitive to the pressures women face with unplanned pregnancies.

Churches are a safe place to talk about pregnancy options.

Churches do not have a ministry prepared to discuss options during an unplanned pregnancy.

Churches are prepared to provide support to women who chose to keep a child from an unplanned pregnancy.

Church members are more likely to gossip about women considering abortion than to help them understand options.

Additional findings can be viewed at LifeWay Research and Facts & Trends.

When Roland Warren and his wife, Yvette, were students at Princeton University, the dating couple faced a dilemma: Yvette became pregnant. A health counselor suggested she have an abortion, saying she would never graduate with a child in tow. The counselor was wrong: Roland and Yvette (who later became a doctor) married, and she graduated as the mom of two children. Warren brings his experience to his work as CEO of Care Net, a 40-year-old national network of crisis pregnancy centers.

What’s the most surprising or thought-provoking finding here?

The father of the child is so significant in this decision. When women were asked who they were likely to talk to about their decision, 61 percent said the father—more than medical professionals, abortion providers, mothers, girlfriends, friends—was the one they were most likely to talk to.

When a woman tells a guy that she’s pregnant, I believe that somewhere deep inside of her, she hopes he’ll respond the same way Joseph responded to Mary: I’ll be a husband to you, and a father to the child growing inside of you.

Also, the finding that many women were attending church at the time they had their abortion. We talk about defunding Planned Parenthood. We can defund Planned Parenthood if Christians stop having abortions themselves. There are about 1 million abortions a year [in the United States]. Roughly 650,000 are women who profess to be Christians in some way, shape, or form.

Say some of those folks are cultural Christians—then cut that figure in half. That still leaves a significant number of Christians having abortions, and the average abortion costs $500. Do the math: Christians are providing more than $100 million to the abortion industry.

What keeps Christian women from seeking help during an unplanned pregnancy?

One big issue is shame. There is a woman in Care Net’s office who had an abortion. She had gone to church all her life. When she was growing up, a young lady in church got pregnant, and they [church leaders] had her come up before the entire congregation. This woman remembered that moment and said, “I’m not going to be that girl. I’m not going to let that happen.”

Mary [mother of Jesus] didn’t make value judgments about the baby growing inside of her. She knew that how she got pregnant had no bearing on the worth of the child growing inside her. But that’s not what we do.

What can churches do to change that perception problem?