The critics aren't in agreement about two twice-over remakes, one on TV and one at the movies.
Jessica Gibson|February 19, 2015
Image: Jaap Buitendijk
Colin Firth, Mark Strong, Alastair MacIntosh, Taron Egerton, and Sophie Cookson in ‘Kingsman: The Secret Service’

Melissa George and Dylan Schombing in 'The Slap'

This week, it's all about remakes. NBC’s new miniseries The Slap, which premiered last Thursday, is an update of a 2011 Australian show that itself was based on a novel published in 2008. The story follows the consequences of one ill-considered action on the lives of an already troubled family. That action, of course, is a slap, dealt by a frustrated man to another couple’s misbehaving child. But in line with the bluntness of the inciting action itself, Slate’s Willa Paskin writes, “[The Slap] is not an elegant, adult, psychologically astute miniseries. Instead, The Slap is a bulldozer: bluntly, gracelessly effective.”

Paskin praises The Slap’s (if you will) heavy-handed treatment of its familial tensions, saying, “[it] can be didactic, diffident, cartoonish, yet despite being not quite good, I found it impossible to watch without emotionally engaging.” Paskin attributes the show’s emotional success to its cast, which Variety’s Brian Lowry agrees is “splendid . . . first-rate and loaded with ready-for-primetime players.” Lowry cautions that the cast, however excellent, may not be enough to carry the show: “Based on two episodes, it’s premature to give the show an unqualified endorsement. But it does represent the kind of drama that should appeal to a sophisticated palate if the ongoing quality justifies first impressions.” Vulture’s Brian Barret is also hesitantly optimistic about The Slap’s success, but he thinks the show’s real point isn’t a surface-level discussion of parenting techniques. “The Slap is as much a serious meditation on parenting philosophies as Moby Dick is a serious meditation on blowholes. The kids are just satellites, warily orbiting adults behaving badly . . . That's why is it okay to hit a kid? isn't a question I'm interested in . . . [but he is interested in] the way The Slap dramatizes how life can chip away at our ability to actually parent.” 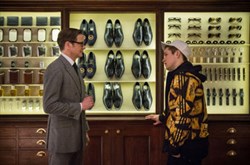 Colin Firth and Taron Egerton in ‘Kingsman: The Secret Service’

This weekend’s box office runner-up, Kingsman: The Secret Service, is also a remake twice over: the film is loosely based on a Marvel comic book series of the same name and is a thematic revival of the Bond-era spy thriller. And though Kingsman owes its ability to be outrageous in its own genre to the cornier Bond films, this movie is anything but classic. As what Vulture’s Bilge Ebiri calls “a fantasy of weaponized Englishness,” the Kingsmen are super-secret super-spies descended from a line of tailors who believed the world should be defended by aristocrats in custom suits.

The story follows a young plebian, Eggsy, who gets drawn into this world of bulletproof umbrellas and meticulously made martinis in order to halt a maniacal plot of global genocide via SIM card. “Kingsman brings the irreverence back to the British spy genre,” says Variety’s Peter Debruge, “offering a younger, streetwise variation on the 007 formula while gleefully pushing audiences’ favorite elements—sartorial taste, killer toys and cracked-out supervillains—to hyperbolic extremes.”

Those extremes don’t sit well with everyone, however, as the New York Times’ Manohla Dargis explains: “As this bludgeoning movie grinds to a halt, its gears clogged by viscera and narrative overkill, even those who enjoy go-go gore may end up yearning for the soft touch and subtleties of Guy Ritchie . . . The problem is that Mr. Vaughn has no interest in, or perhaps understanding of, violence as a cinematic tool. He doesn’t use violence; he squanders it.” Ebiri describes Kingsman’s violence as “comically stylized brutality” made all the more extreme through heavily edited, perspective-bending shots. “The film’s central conceit,” he says, “is that to be a super-spy, you not only have to be a lethal killer, you also have to be a debonair gentleman (or gentlewoman), one with unflinching moral rectitude—a philosophy the film itself casually and knowingly betrays with the gonzo joy it takes in its many scenes of tongue-in-cheek violence.”

1 of 2
Colin Firth and Taron Egerton in ‘Kingsman: The Secret Service’Melissa George and Dylan Schombing in 'The Slap'