Lies that lead to happy endings? It's the kind of con that only happens at the movies.
Alicia Cohn|February 27, 2015
Image: Warner Bros.
Will Smith and Margot Robbie in 'Focus'
Our Rating

Falling in love with a con man never leads to a happy ending. But Focus scams us into thinking it’s got one, anyhow.

That scam is not difficult. Audiences are primed to believe that Will Smith and Margot Robbie belong together, regardless of external obstacles or the nature of their characters. It’s a narrative we just keep going back to in our love stories: Someone lies or at least doesn’t quite tell the truth, it causes confusion and misery, and we still get our “happily ever after.” A classic love story would at least mandate untangling the lies between them before the couple could wind up together, but in Focus, lying is actually the tie that binds. 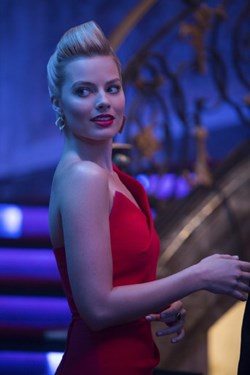 Focus is a fun, if shallow, movie in an entertaining tradition of light comedies about thieves (many of them modern updates, from The Italian Job to Oceans 11), and though it doesn’t add anything to its genre, it has a likable cast, a sneaky script, and some creative cinematography. We can wish it made a statement about what telling lies does to the liar and the people he fools—but this is a movie, and a movie can twist the narrative and still reach a tidy, feel-good conclusion.

No one does feel-good as effortlessly as Will Smith. Forty-six years old and buff and charming as ever, Smith plays Nicky Spurgeon, a pedigreed scam artist—his father and grandfather are well-known in the professional diversion thief community. Nicky meets Jess Barrett (rising star Margot Robbie) as she’s in the middle of her own scam. These two lie to each other from the start: it’s how they make their living, but also who they are as people.

Since Jess is a beautiful woman, her strongest asset—as we see over and over—is using sex to manipulate and distract. But Jess is one of those movie-beautiful women who is still “likeable” because she doesn’t enjoy wearing sexy clothes and is apparently terrible at seduction.

“Does that feel sexy on your face?” Nicky asks when Jess is trying on “thinly veiled allure” to convince him to take her on as his apprentice. Will Smith can insinuate that Margot Robbie has no sex appeal, because in this case the viewer knows it’s a lie. But that’s not always the case in Focus: Glenn Ficarra and John Requa (Crazy, Stupid, Love; I Love You Phillip Morris) play with their theme by effectively fooling the audience, more than once, into false expectations about where the story is heading.

Jess is supposed to be a straight-talker; she tells Nicky there’s “no earth shattering hump in the works,” but, of course, it’s obvious to both them and the audience that sex is in their near future.

“Get their focus, take whatever you want,” Nicky tells Jess when he teaches her the art of “lifting,” or being a pickpocket. Obviously Nicky practices what he preaches; he has all of Jess’s focus, and she at least has all of his lust. (Her interest in Smith is never questioned. Of course she would want him, despite the fact that he has none of the traits of a good man. Look at him.)

And like clockwork, they finally have sex, but it doesn’t make them more honest. This, at least, is true to life: If you don’t bring it to bed with you, you’re not going to find it there.

Over and over, the con happens on two levels: Nicky and Jess, and also the film and the audience. Are they in love, or aren’t they? Who’s trustworthy? Is any relationship real? 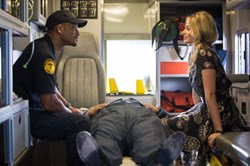 Will Smith and Margot Robbie in 'Focus'

The characters find the other’s ability to deceive attractive, even as they continually use it on one another, and maybe even use one another. And yet, near the film’s end, characters are still declaring Nicky trustworthy and “a good person”—at which point, the audience is primed for another trick.

What it actually does is profoundly conventional, but the movie does point out—as Gone Girl did, in a very different way—that most people’s everyday lives and relationships are loaded with a certain kind of con. Nicky declares he’d like to be a more “normal” liar, the kind who tells his wife her jeans don’t make her look fat (a line that got a big laugh in the theater).

Audiences seem ready to believe that close relationships are built on lies—not big cons, but white lies. But can a character like Nicky ever figure out where to draw the line? Can we?

That’s the trouble with a movie like Focus, where we’re supposed to root for a con man or a liar: by its nature, it can’t acknowledge that telling lies fundamentally means the liar isn’t the good guy—and that learning to navigate the lies isn’t what turns Jess into a strong woman.

So while Focus is fun, with intrigue, twists, and turns that will likely only hold up to one viewing, the romance—which should just be a distraction—ends up being the focus. Unfortunately, loyalty between liars doesn’t equal a love story. 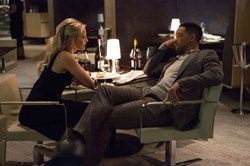 Will Smith and Margot Robbie in 'Focus'

Much of the comedy in Focus comes from sexual humor ranging from jokes about roofies to gay sex. This is the main function of side-kick character Farhad (Adrian Martinez), who shows Jess explicit photos (the audience does not see them) and makes obscene gestures. The plot of the movie revolves around lying and stealing money in the form of purses, wallets, watches, and stacks of cash. Nicky and Jess sleep together (no nudity is shown). The f-word is used multiple times, easily earning the film’s R-rating. One character is shot, with excessive blood loss, and operated on in unsanitary conditions.

Alicia Cohn is a regular contributor to Christianity Today's Her.meneutics and freelance writer based in Denver. She tweets @aliciacohn.