Alissa’s note: Ken Morefield, a long-time contributor to Christianity Today Movies and a cinephile and critic for whom I have great respect, writes a monthly post we’re calling “The Long Tail.” Each month, he looks at a few films that are being primarily distributed to American audiences through DVDs or Internet streaming and tries to surface some movies that might otherwise fly under the radar. Look for a new column every first Tuesday of the month!

As with most years, there’s a front-runner for the Best Documentary Feature at the Oscars—Laura Poitras’s Citizenfour. But I won’t be surprised if we hear Rory Kennedy’s name after “. . . and the Oscar goes to . . . ” The nominations hint that the Academy may still be a tad more comfortable with strongly political films that embed their ideological arguments into an historical narrative. (And the more remote that history, the better.) 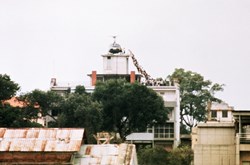 Kennedy’s film Last Days in Vietnam, which is now available to stream on Amazon and other platforms, is fairly conventional. It deftly mixes archival footage, talking heads reciting stories, and some sparse but effective special effects to help contextualize the images and memories that form the bulk of the story. If voters are already tired of the red-state/blue-state reductionism in the dialogue surrounding American Sniper and Selma, Last Day’s conventionality may turn out to be an asset. It certainly won’t hurt that Kennedy is popular on the documentary festival circuit, where those of us who love the genre are well aware of her work promoting the films of others. (Among other titles, she is listed as a producer for Liz Garbus’s feature Bobby Fischer vs. The World.)

Oh, yeah, and it’s also a great documentary. Vietnam is a big story. Too big, in fact, to tell in one sitting. By focusing on a single event—the fall of Saigon—Kennedy is able to at least tell the story in microcosm. She finds a specific foothold in the historical archive and then works her way out from there.

When documentarians tackle subjects that took place after the advent of television, they have to grapple with the sheer mass of archival footage, along with the fact that people experienced the events through mass media. For Last Days, that means following smaller threads of well-known stories and seeking ways to make all-to-familiar images seem fresh. Kennedy does both well; as in last year’s excellent Iran-hostage documentary, Our Man in Tehran, her film includes both participants you would expect and some first-hand accounts that may surprise. Last Days in Vietnam is well worth a look, both for the history buff and the new student trying to get a “big picture” grasp of an important event.

'Rocks in My Pockets'

By contrast, Sigme Baumane’s Rocks in My Pockets won’t win any awards next month. It was put forward as Latvia’s submission for Best Foreign Language Film, but it did not make the final cut. (Baumane’s film is in good company; neither did Two Days, One Night.) Rocks in My Pockets is Baumane’s first feature after a half-dozen shorts, and a quick summary of its director’s biography should be enough to inspire anyone to watch the film.

Consigned to a Soviet mental hospital after admitting a suicide attempt when she was eighteen, Baumane was only able to continue her studies when her parents bribed officials to downgrade her diagnosis from “schizophrenia” to “manic depression.” The director uses stop-motion and hand-drawn animation to tell the tale of five women from her family tree, each of whom suffered from depression.

Because of its subject matter, Rocks in My Pockets can be hard to watch. The film’s second scene visualizes its narrator’s imaginative concerns that suicide by hanging causes a person to void her bowels at the moment of death. One understands that the in-your-face-I’m-beyond-caring aesthetic is a survival mechanism for those suffering from life-long depression, but it can still be hard to take.

Where the film really scores, though, is in Baumane’s ability to communicate depression metaphorically to those of us on the outside looking in. A woman pushes a rock, Sisyphus-like up a hill. That’s conventional enough, almost cliché. But then the rock turns into a monster. In terror, the woman turns and flees, running full-speed into . . . the rock, which has magically teleported back into her path.

'Rocks in My Pockets'

The line that separates dark humor from self-indulgent navel-gazing is fine, but Baumane stays on the right side of it. Her keen eye for observation lets her find the detail that authenticates similar stories. The stultifying dullness of a provincial life is reduced to forty trips a day up and down a hill to carry water for dairy cows. A kerchief head-covering donned to appease a sexually jealous husband becomes a symbol of a woman’s status as a man’s chattel, rather than his partner.

Not surprisingly, given its director’s history, Rocks in My Pockets embraces biological determinism. The narrator appears to matter-of-factly accept the idea that we are the products of our genes and our genes only—and that may provoke some Christian viewers.

But if Baumone’s worldview challenges our own, it is nevertheless a view worth attending to. There is a family history of depression, and it’s easy to see how someone born into such an environment would look upon the circumstances of her birth as an inheritance as inescapable as original sin.

Stick with the film until the end, though. Even the most broken, ailing hearts know how to grope after the light and to receive expressions of love and empathy when we are willing to give them. A kind word, a smile, a human touch may not have the god-like power to heal, but it is miraculous how often these things revive hope and provide a foundation for faith that the pain and emptiness we feel may not necessarily be eternal.

Rocks in My Pockets can be screened through the Yekra platform.

Kenneth R. Morefield (@kenmorefield) is an associate professor of English at Campbell University. He is the editor of Faith and Spirituality in Masters of World Cinema, Volumes I II & III, and the founder of 1More Film Blog.