When aspiring film critics ask me for advice, one of the first things I say is to avoid the word “boring,” if you can. This word (and others like it) reveals more about the critic’s response to a film than it does about the film itself.

But there are times in every reviewer’s life—and this is one of them—when he has to break his own rules or refuse to follow his own advice. No word other than “boring” accurately conveys what I think of Seventh Son. There’s nothing openly, brazenly wrong with it. It’s not particularly good. But, maybe worse, it’s also not bad in any particularly interesting ways.

The title character is Tom Ward (Ben Barnes), whose status as a seventh son qualifies him in some vague way to be an apprentice to Master Gregory (Jeff Bridges), a famous Spook. Spooks fight witches using an ambiguous combination of sword play and folk knowledge. Gregory is in pursuit of Mother Malkin (Julianne Moore), the queen of all witches. He used to be in love with her, but for some vague reason he now hates her, and for slightly less vague reasons she returns his loathing.

Her motivation may have something to do with his imprisoning her for—years? decades? ages?—using what we might call “the Maleficent maneuver.” That’s where you pretend to love a woman until she lets her guard down and then subject her to the sort of backstabbing betrayal that ensures the audience will be forced to wonder who the monster in the relationship really is.

Gregory must defeat Malkin before some indeterminate future date (the next blood moon?) or else she’ll either be invincible or harder to kill. I’m not sure which. In an initial battle, defeating Malkin entails getting close enough to pump her up with some toxin or other, but later the film introduces a necklace that—does what, exactly? 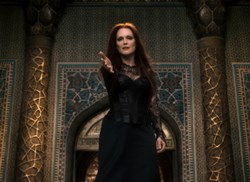 Obviously, the movie’s weakest element is its writing—surprising, given Steven Knight shares screenplay credit with Charles Leavitt. Knight’s Locke screenplay was exceptionally deft, but everything that’s not a battle scene in Seventh Son is reduced to the barest, expository minimum. We are told and shown what happened to Gregory’s previous apprentice, but his fate becomes more of a running joke than a source of any recognizable human emotion in the Spook’s relationship with Tom.

When Gregory and Tom are called to perform an exorcism, Gregory complains about losing “two days journey,” but it’s never said where they were going in the first place. Presumably to fight Malkin, but the film’s internal geography is one more element about which it’s pretty sketchy. Without some kind of specific narrative details, we are never sure what’s at stake—beyond staying alive—in any of the intermediary battle scenes.

Genre pieces don’t always need tight scripts. Sometimes the performances can keep us invested in a story, even if the script is weak. Here, though, some usually reliable actors fall flat. Bridges’s turn as Gregory is a textbook illustration of Walter Besant’s maxim that verbal tics are poor means of distinguishing characters. He does an exaggerated version of what I can only describe as “Jeff Bridges voice,” which sounds a bit like South Park’s Eric Cartman doing a bad Yoda impression.

At times—such as in an early pub fight—Gregory appears to be channeling Jack Sparrow. At other points he comes across like Kill Bill’s Pai Mai or Star Wars’s Qui-Gon Jinn with a General Custer beard. I would pay to watch Julianne Moore read the phone directory, but it’s hard to deliver lines such as “hell awakens” or “never, never look at me!” with any kind of stylistic variation. 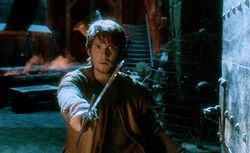 What keeps Seventh Son just on this side of bearable are the visuals. I am officially at the point where I give any fantasy or 3D film an extra half star for having some color in its palette besides teal, and the integration of special effects with human actors is pretty fluid. The dragons and boggarts and bears (oh my) are imaginatively constructed and skillfully rendered. But while the production design was good enough to draw me into Seventh Son’s world, the story wasn’t engaging enough to make me want to stay.

It is accepted conventional wisdom of the current moment that a film can use a derivative of the f-word once—and once only—and still receive a PG-13 rating. That is how you should parse the phrase “brief strong language” in Seventh Son’s MPAA description. A comment about the single use of that particular word, though: it is so gratuitous, so out of tune with the film’s overall tone, that it ends up being quite jarring. It took me out of the film more so than does the use of profanity or obscenity that is more liberally sprinkled throughout most R-rated features. Sometimes PG-13 films will use some bizarrely more acceptable forms of obscenities to cover up the absence of certain actual words, and looking for the one usage can be like hunting for an Alfred Hitchcock cameo or the appearance of the eponymous Waldo of children’s books. Here it is spotlighted and played for laughs. While that doesn’t exactly make the film worthy of an R rating, it does reveal something about the artists’ aesthetic sensibilities.

Most of the rating is for violence. As with most entries into the fantasy genre, Seventh Son is able to get away with more violence than would a number of movies in a contemporary setting. People are burned alive—but, hey, they are witches. Most of them, anyway. The witches transform into all sorts of scary animals that threaten to tear, slash, and bite their human opponents. The exorcism scene could disturb or offend some viewers. There is kissing but no nudity. Although it is implied that a female character is skinny-dipping, her body is covered up by the time the male character and the camera look at her.

Nota bene to Christian parents: increasingly, the fantasy genre lazily conflates the occult (black magic, derived from demonic sources), Wicca, and generic forms of pagan “witch”-craft. Like Maleficent in Sleeping Beauty, Mother Malkin invokes the powers of “hell.” She also takes possession of a young child, and she is exorcised through a ritual that has Catholic trappings but avoids sectarian language. Seventh Son doesn’t have anything approaching a systematic theology, but the occult overtones could certainly be a deal breaker for some families.