We talked about God a lot this year in pop culture, but not the same way.
Alissa Wilkinson|January 2, 2015
Image: Paramount Pictures
Russell Crowe in 'Noah'

See the introduction to this series on religious themes pop culture explored in 2014, and the posts on memory and justice and on evil.

Any series on pop culture getting religion is going to have to think, at some point, about the supernatural, and especially God. This is appropriate in thinking of 2014, a year in which we were given to telling stories about the supernatural, from films explicitly aimed at faith audiences to movies and shows made by non-believers that nonetheless told stories of the miraculous.

Early this year, at The AV Club, Todd VanDerWerff explored how dark TV dramas like Fargo, The Americans, and Hannibal were interested in God, who was “is either a cause, an absentee landlord, or a writer, but he’s very much in the details. His presence—or the lack thereof—is something all three series wrestle with and in ways that are more complex than TV’s usual 'skeptic/believer' dynamic.” (I followed this up by looking at the Amazon Original pilot Hand of God.) And the question of the supernatural is raised, and unanswered, on other shows, most notably True Detective. (The more I write about this topic, the more I realize that a brutal, graphic HBO miniseries may have been the most religious show of the year on TV.)

Nonetheless, the supernatural at large and God in particular were of interest in our pop culture. I'm thinking of “the supernatural” this in literal terms: things that come from beyond the realm where they can be explained scientifically—miracles, happenings, strange occurrences. Do things exist beyond the world that we can see, taste, and touch? That is long the contention of many organized religions, while others tend to doubt it may be so.

In the past, TV and films have often been interested in supernatural forces, from shows like, well, Supernatural as well as Buffy the Vampire Slayer and True Blood and many others, to countless movies that feature ghosts, spirits, vampires, werewolves, gods, demons, and much more. One of the great things about TV and film is that we can explore those things within the more comfortable realm of entertainment; you don't have to believe in vampires to enjoy Twilight (or Let the Right One In). A good enough story lets all but the most didactic among us suspend our disbelief for a while.

This year, we were at it again, with some interesting results. In general, we seem to believe one of two things: either supernatural forces exist and act apart from our wills, or we are the ones who bring about seemingly supernatural results. But while you might think the results and answers would line up with the makers' beliefs, it seems that's not always the case.

Sometimes it was. There was the obvious one: Interstellar, the space- and time-travel mind-bending movie by Christopher Nolan, which I argued was an overtly religious film, even if it seems to answer its religious questions with human-centric answers. And there were campy films meant to be fiction like the marvelous Guardians of the Galaxy and the late 2013 release Thor: The Dark World, both of which feature god-ish characters doing destructive things. The Lego Movie even ended with not-exactly-supernatural but pretty-close implications (though it's a film about toy blocks, so take that as you will).

But then: then, there was Noah, made by Darren Aronofsky and co-written by Ari Handel, both of whom say they are not religious though they drew heavily on Jewish writings for the film. (My review.) This retelling of the story found in Genesis takes the supernatural very seriously. God's voice isn't heard by anyone but Noah in the film, but God himself (whom the characters call “The Creator”) is an accepted entity by everyone on screen, and things we'd consider miraculous seem commonplace. People live extremely long lives; barren women conceive; rocks create fire; snakeskins light up and hand a heritage from father to son; fallen angels are encased in rock, and eventually set free. And there's the flood, of course. The miraculous is a fact of life in antediluvian earth, and all is considered to have come from the hand of The Creator.

Or there is Exodus (Brett McCracken’s review), a more earthly-grounded, less mythical-feeling retelling of another Biblical tale, made by Ridley Scott, who is not at all religious. The film got in hot water for a number of reasons, one of them being the star's assertion that Moses seemed “barbaric” and “schizophrenic” to him when he read the story in the Bible. But you wouldn't know it from the film. For all its “natural”-looking plagues, their causes are still prompted by that unseen force mentioned in the title cards, named “God,” who has not forgotten his enslaved people. And yes: the Red Sea still parts. It's not quite the wall of gelatinous water we get in other adaptations, but it is miraculous nonetheless.

Shane Harper and Kevin Sorbo in 'God's Not Dead'

The highest-grossing “faith-based” film of the year, God's Not Dead, is interesting for taking a completely different tack. The film is explicitly evangelical and evangelistic, made by Christians and telling a story designed to appeal to Christians. And certainly God might be considered to be working in the film, given that most Christians believe that he works for the good of those who love him (and because of the title, obviously). On the other hand, in the film, the job of defending God is given to an undergraduate who wins his argument against an aggressively atheistic philosophy professor largely through rhetoric. One wonders, at least a little, if it even matters if God does exist, as long as you can argue for him effectively.

Similarly, while the real-life story of Unbroken (which I reviewed here) tells the story of a supernatural delivery from bitterness that enables Louis Zamperini to perform the nearly-unthinkable act of forgiving his captors, the movie interpretation turns that feat into more of an inspirational idea that it is the human will that is supernatural—which is to say, surpassing all odds. Certainly, the admirable story portrayed in the film does surpass scientific explanation. But it might perhaps have been stronger if, for instance, Zamperini's religious friend—who also survived the war—had not dropped out of the film halfway through. Is there more to survival than the human will? 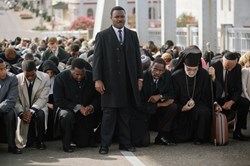 A perhaps more nuanced version of God and the supernatural shows up in Selma (my review), in which faith is the motivating factor behind the work of Martin Luther King, Jr. and those around him. When these characters pray, they expect an answer—and even when they are discouraged, they are confident that “we shall overcome” largely because (not stated, but implied), as 1 John 4:4 says, he that is in them is greater than he that is in the world. There is a sense of transcendence around the evil of injustice in Selma, and a sense that all shall be made right because it is the will of someone greater than the band of protestors. It is this sense that King appeals to—and this sense that we know still hangs over the film, since it takes place four years before King is shot and killed.

Noah asks why God would let people have enough freedom to destroy the earth, or just to destroy their families through their own maniacal obsessions. Exodus wants to know why God is vengeful enough to slaughter innocent babies. In its own way, God's Not Dead is even wondering why a live God doesn't just show himself and clear up all the doubt, resorting to a character's hatred of God (a being he does not believe in) to explain his atheism. (To be fair: I think this is an unfortunate reduction and mischaracterization of why many atheists and agnostics do not believe in the existence of a divine being.)

But, in his article, VanDerWerff points out that the question in the three shows he explores is also why, if God exists, he allows suffering. It seems that considering the existence of God—or whether we just play God ourselves—leads us all to one inexorable place, which is to wonder why, if God exists, we also suffer. It leads us to consider the problem of evil and suffering, which, frankly, is something I've thought about a lot, having been on the receiving end of senseless tragedy myself and having watched much of the suffering perpetrated on children by many and on my fellow Christians by ISIS. It has been a difficult year to watch the news.

I've read books on theodicy, and worked with people who have written them, and frankly, I don't have an answer. Evil exists. Pain and suffering exist. God, I believe, exists, but these things do, too, and all the answers I can muster still don't really, fundamentally explain the why in ways that go past the mind to quiet the heart and still the soul.

Then again, nothing else does, either. So I returned, on the first day of the year, to Psalm 13, a passage beloved of many within Christianity and beyond it:

How long, O Lord? Will you forget me forever?
How long will you hide your face from me?
How long must I take counsel in my soul and have sorrow in my heart all the day?
How long shall my enemy be exalted over me?

Consider and answer me, O Lord my God;
light up my eyes, lest I sleep the sleep of death,
lest my enemy say, “I have prevailed over him,”
lest my foes rejoice because I am shaken.

But I have trusted in your steadfast love;
my heart shall rejoice in your salvation.
I will sing to the Lord,
because he has dealt bountifully with me.

Pop culture is never going to solve this problem. I'm pretty sure nobody is, this side of the eschaton. Thankfully, pop culture can remind us that we are all grappling with it, and it's okay that we don't have a final answer. If the difficulty of evil plagued the Psalmist millennia—and if our non-theist artists can make movies in which God works in mysterious, miraculous ways—then maybe we can all keep learning from each other, and understanding better how we think about God in our age.

1 of 6
'Exodus: Gods and Kings'Martin Freeman and Billy Bob Thornton in 'Fargo'Shane Harper and Kevin Sorbo in 'God's Not Dead'David Oyelowo in 'Selma'Jack O'Connell in 'Unbroken''The Lego Movie'