Buddy road trips proliferate, plus a true story about an ex-gay pastor.
Alissa Wilkinson|January 25, 2015
Image: Jakob Ihre
Jesse Eisenberg and Jason Segel in ‘The End of the Tour’

You can also read diaries from day 1 and day 2.

Around 7:30am on the third day of Sundance, I boarded the shuttle to the Eccles Center, where The End of the Tour was screening. It's hard to explain how nervous I was about this film, based on David Lipsky's book Although Of Course You End Up Becoming Yourself, because it stars Jason Segel as the author David Foster Wallace, whose work is very important to me. I must have told dozens of people that it would either be tremendous, or horrific. Early reports from the previous evening's screening were positive, but I was still holding my breath.

And at the end of the film, I let it out in a shuddery, exuberant sigh. James Ponsoldt (who also made one of my favorite films, The Spectacular Now) knew exactly what to do with this one. What we get is mostly Segel as Wallace and Jesse Eisenberg as Lipsky, a Rolling Stone reporter who joined Wallace on the last leg of his Infinite Jest tour, right when Wallace's fame was at its apex but before he'd been canonized. Segel nails Wallace's peculiar state of being, from his lumbering bear walk to the bandana and scruff. I've been listening to recordings of Wallace reading his own work; apparently Segel has too. But more importantly, the screenplay captures everything that makes readers fall in love with Wallace, particularly his nonfiction: the almost crippling self-awareness mixed with a pleasantly affectionate desire to please. Wallace is a writer obsessed with his reader, obsessed with empathy and cconnection, something he finds, tentatively, in Lipsky. And so it's those moments when Eisenberg's Lipsky crosses protocol—he is a journalist, after all—and reminds Wallace that this ... 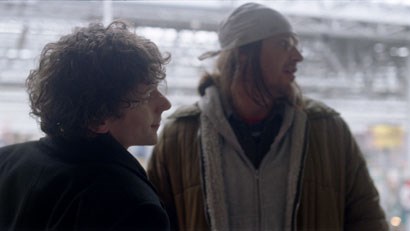