When CSI: Crime Scene Investigation returned for its 15th season last fall, something was different. I’ve been a regular CSI viewer, so I was familiar with the show’s characters, formula, and cinematic methods of lifting the forensic criminology rocks to show the squirmy stuff beneath. This season, nothing had really changed on the surface, but the season premiere made me newly uncomfortable. I couldn’t put my finger on why.

My wife could. As the final scene played out, she got up and walked out. “That’s just gratuitous,” she said.

That’s it! I thought. The rest of the season (including the recent midseason premiere) was more of the same, and there’s no other word that describes it quite like “gratuitous”—something uncalled for, something that lacks reason for its presence.

Regular watchers of CSI (and, to an extent, one of its spinoffs) are familiar with its characteristic tropes: blood-spattered crime scenes, morgue shots of open cadavers and organs on a tray, and the trademark “follow the bullet” camera penetration into a body to demonstrate exactly why this victim died. While edgy and fresh in 2000, this form of crime storytelling is now almost passé. Until this season, though, the show’s use of these tropes was an aside, of sorts: it was a part of the storytelling, but the characters and story itself remained the focus. You could count on one or two brief “eww” scenes, maybe a third—but they passed quickly and were incidental.

In storytelling terms, these are what Hitchcock called “MacGuffins”: plot devices that are unimportant to the story. We may just as well have seen them looking at x-rays ... 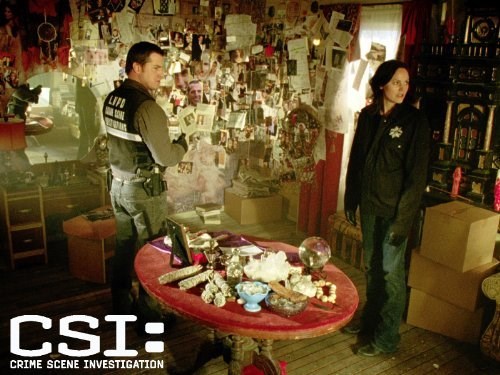