Ant-Man has all the right parts, but it's time for Marvel to start taking the issues it raises seriously.
Jessica Gibson|July 17, 2015
Image: Marvel Studios
'Ant-Man'
Our Rating

Marvel Studios has done it again: Ant-Man is a good superhero movie.

And once again, that’s just about it.

From all indications, the excellent Avengers: Age of Ultron earlier this summer (which I had the pleasure of reviewing here) was a once-in-a-franchise fluke as a Marvel film that sought to be more than the sum of its parts. Ant-Man has all the right parts, but in Ultron’s wake and at the forefront of a long upcoming lineup of films, it really is time for Marvel to start doing better.

Right parts or no, Ant-Man is a filler movie. Its only real purpose is to tide us over in the lull before Captain America: Civil War next year. The most exciting scene in the whole movie isn’t even in the movie, it’s the Civil War related post-credits bonus.

All that said, by the simple fact that it runs on the (very) tried-and-true Marvel formula, Ant-Man has enough of the classic superhero origin elements to still be an enjoyable flick. Celebrated scientist Hank Pym (Michael Douglas) is the mysteriously omniscient, Mr. Miyagi-style mentor; Darren Cross (Corey Stoll) is the bitter young genius whom said mentor personally slighted; Hank’s daughter Hope (Evangeline Lilly) is the sharp-witted protégé with a tough exterior who’s really so sweet once you get to know her.

The three are engaged in undercover corporate war over a formula Hank developed in the 80s that changes the space between atoms, allowing objects to shrink and grow at will. Cross is on the verge of completing his own version of the formula, a horrible act that would, of course, threaten the entire planet and therefore must be stopped at all costs.

And stumbling into this adventure is the unwitting crook with ... 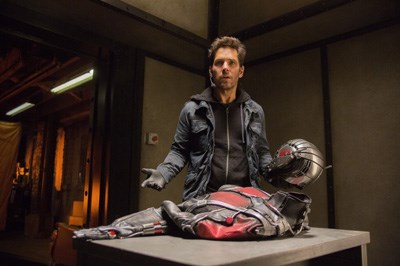