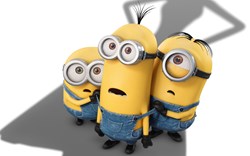 You might think, “Well, watching Minions as a family is better than nothing.” The truth is, it’s definitely not better than just reading to your kid, and probably not the most enjoyable way to spend what’s quickly approaching $13 per ticket at the theaters. The music, which could feel like a welcome inclusion, is so clearly pandering toward adults who are escorting their children to the movie—“Hey, if we placate you with a 60s song every quarter hour, will you promise not to walk out?” It would be just as fun to watch an hour and a half of Super Bowl commercials, which are at least more consistently entertaining.

And now that that’s out of the way, let’s talk.

That whole “is something we do together really better than nothing?” is another way of asking a bigger question: is it better to spend 92 unretrievable minutes on something like this, as a family, rather than being at home together, sitting in the living room, being adjacent to one another even if you’re not all doing the same thing—even if you’re all on your phones, or iPads, or whatever, this being 2015 and all?

It’s rude to pose a question like that and not provide at least a tentative answer. So: probably not. Probably, you’d be better off doing almost anything with your kid than taking them to see Minions, especially considering Inside Out is also in theaters—Pixar’s first truly outstanding film in half a decade, which addresses the full spectrum of emotions that a child experiences with sincerity, depth, humor, and compassion.

And yet, I can’t actively warn you against Minions. Apart from a couple of yellow, plasticky, non-human Minion butts, and some pervasive, relentlessly hollow commodification of entertainment, there’s no reason on paper to not see the film. It’s—fine?

No reviewer really can tell you whether or not to see this movie. Minions is either aggressively mediocre, or otherwise it alternates between sort-of-good and mostly-bad. Either way, I don’t know if you’ll like it or hate it. But there are more complex questions to ask yourself before you decide whether to see this one.

For instance: What does it mean, when you go to the movies with your family? Is it supposed to be something you can talk about together? Or a way for everyone to all escape to the same place, at the same time?

Sometimes, after re-packing into the car, while slurping down the last of residual fountain drinks, do you talk about what you liked about the movie? What you didn’t? What could be different? Or do you just re-hash what parts you found funny?

Do you—as a grown, presumably sane adult—need a break from your kids? Even just 1.533 hours of laughter and silence, in equal measure, as you vacate your brain and space out and try to not think of anything besides the screen and, simultaneously, not think about anything on the screen?

Movies like Despicable Me1 & 2 and Minions are made to both lure kids into theaters and then inspire kids to purchase every bit of licensed memorabilia that pertains to the film: backpacks, pencils, Walmart shirts, video games, and so on. Is that something you want to spend money on? Do you find the trans-glottal gibberish of the Minions enough to withstand over the course of a few months of games? Withstandable as something your child might start spouting during dinner-time?

Because Minions was not put together for the purpose of making people feel good—of bringing a smile to your face, of giving you a bridge to talk to your child whose generation seems increasingly odd and media-overloaded and dumb. It’s to sell lunch-boxes and backpacks, to build Minion Hype up so much such that your child can’t barely stand themselves unless they’ve got the salient bit of Minion memorabilia that’ll satisfy them for a month or so, probably less. It doesn’t seem worth it, to me.

But that’s up to you.

Nothing of value to mention—the aforementioned Minion tushes are about as risqué as the film gets. The film is wall-to-wall slapstick humor, some of it toward the more violent side, but it overwhelmingly registers as a sub-par homage to the Three Stooges rather than anything really malicious.

Jackson Cuidon is a writer who lives in New York City with his wife and dog. He Tweets once in a while @jxscott.