An insidious version of a “family friendly” movie that is a shameful artifact of nerd culture - and some recommendations for better ones.
Jessica Gibson|July 29, 2015
Image: Columbia Pictures
'Pixels'
Our Rating

Most of the time, I’m an unashamed nerd. I’m an unironic, overenthusiastic, equal-opportunity lover of “the miracle of human consciousness.” I enjoy a lot of things with a lot of energy and I don’t easily calm down or back off from a cultural product I’m excited about.

I say all this so you can understand how serious this is: seeing Pixels has made me want to go into nerd hibernation until this horrible storm blows over.

The movie can stuff in as many beloved arcade game characters as it wants, but it will never compensate for its lazy storytelling, awful characters, blatant misogyny, and deeply unsettling moral code. It’s the worst kind of bad joke dressed up to look like a generationally inclusive nostalgia-fest. The most disappointing thing about it is in the hands of a different filmmaking team its concept maybe could have made an enjoyable movie.

The premise is that a recording of the 1982 World Gaming Championship tournament was sent into space on one of a probe seeking contact with extraterrestrial life. That probe was found by an alien race who interprets our predominately violence-based games as a declaration of war. Cut to the present day and the aliens have come to Earth to accept our challenge by raining pixelated fire down on a military base via life-size Galaga starships.

The—I can’t bring myself to use the word “heroes” —protagonists of the story are the group of middle schoolers who won that same tournament in 1982: Brenner (Adam Sandler), Ludlow (Josh Gad), and Eddie (Peter Dinklage, why did you ever think being in this movie was going to be good for you?). These three have grown up to be losers, but their buddy Cooper (Kevin ... 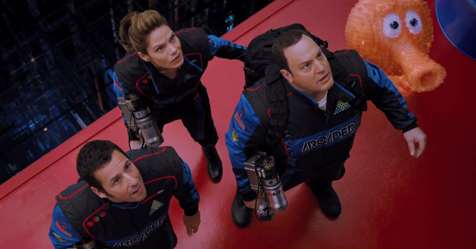