Telling the story of the early Church in a way that speaks to modern Christians while keeping curious non-believers entertained can't be easy.
Peter Chattaway|June 24, 2015
Image: NBC
'A.D. The Bible Continues'

The first episode of A.D. The Bible Continues was basically a dramatization of the death and burial of Jesus with a few fictitious bits thrown in. The season finale is the almost complete opposite of that: it's a heavily fictionalized version of secular history that gets the biblical stuff out of the way as quickly as it can—and it leaves many of its most important plot threads unresolved, presumably in the hope that the series will get renewed for a second season.

Let's start, as the episode more or less does, with the biblical stuff, most of which comes from Acts 10.

For the first time ever, we see the centurion Cornelius with his family, in his home in Caesarea. Cornelius is still shaken by the fact that he executed the Christian woman Joanna in the previous episode. But then an angel appears to him and says, "God has looked kindly on your sorrow and repentance." (In the Bible, the angel tells him, "Your prayers and gifts to the poor have come up as a memorial offering before God." I discussed the significance of differences like this in my recap of last week's episode.)

The angel tells Cornelius to send men to bring Peter back to Caesarea. We then cut to Peter, who has a vision of various animals while a voice tells him, "These are looked upon as unclean, but do not call anything impure that God has cleansed." This sequence feels utterly rushed, and it lacks the back-and-forth drama of the biblical story, in which the voice tells Peter to "kill and eat," and Peter actively resists. (The best cinematic version of this story by far is in the 1985 miniseries A.D. Anno Domini, which communicates the shock that Peter must ... 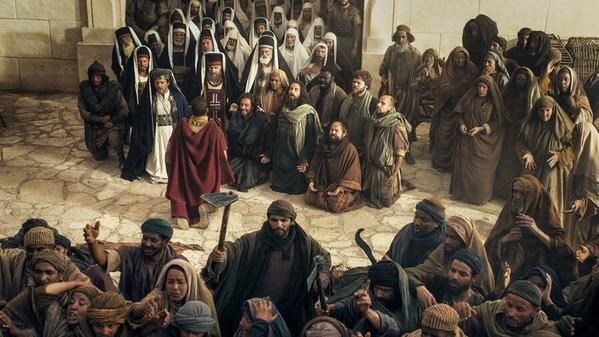