The penultimate episode of A.D. The Bible Continues is called “Rise Up,” which refers to two things: the fact that the Zealots are preparing an uprising, to protect the Temple from desecration by Caligula's statue; and the fact that Tabitha, who was flogged by the Romans for converting to Christianity last week, dies from her wounds and is brought back to life by Peter this week. (He actually tells Tabitha to "Get up," rather than "Rise up," but hey.)

Along the way, the episode also finally depicts the meeting of Philip and the Ethiopian eunuch. This would have happened three weeks ago if the series was telling these stories in order, but that's okay: the Luke-Acts tradition doesn't always narrate its events in chronological order either. (Case in point: Luke 3 doesn't mention the baptism of Jesus until after it mentions the arrest and imprisonment of John the Baptist.)

The first half of this episode is mostly concerned with fictitious political maneuvering.

Caiaphas rallies the Jews and calls for unity in defense of the Temple. James the Just seizes the opportunity to negotiate with Caiaphas for an end to the persecution of the Church.

Meanwhile, the Zealots rally their own supporters and nearly kill Reuben, the head of Caiaphas's Temple guards, for spying on them. Reuben escapes and tells Caiaphas and Leah about the Zealot threat, and about the Ethiopian eunuch's involvement with it.

Caiaphas, on hearing about the Zealots' plans, refuses to tell Pilate, afraid that it will make him look like a Roman collaborator at the very moment that he is trying to lead his people in protest against Rome. So Leah goes behind his back and tells Pilate ... 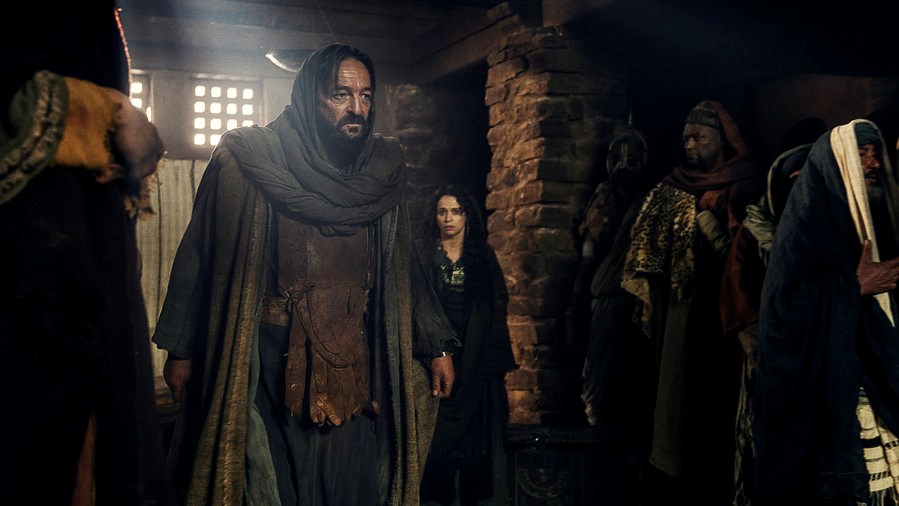