There are some surprises in the tenth episode of the NBC miniseries, when the show also says goodbye to Saul.
Peter Chattaway|June 11, 2015
Image: NBC
James, the brother of Jesus in 'A.D. The Bible Continues'

A.D. The Bible Continues says goodbye to Saul, and thus to one of its most fascinating and even endearing characters, in its tenth episode. It also introduces two new characters in ways that might surprise viewers who are familiar with their Bibles.

First, Saul: Ever since he became a believer two episodes ago, Saul has been a surprisingly engaging character, and the series has brought a not-unwelcome touch of humour to his interactions with the apostles, who can't believe that one of their former enemies is now acting like he knows more about the faith than they do.

Saul's take-charge attitude, and the friction between him and the apostles after they accept him as a fellow brother in Christ, aren't exactly spelled out in the passage from Acts on which this episode is based, but you can certainly find these elements in Paul's epistles, all of which were written over a decade after the events of this episode.

Acts 9 tells us that the apostles ultimately sent Saul back to his home in Tarsus because his life was threatened by some Hellenistic Jews, and Paul himself says in Acts 22 that he left Jerusalem because Jesus appeared to him in a vision and told him to do so. But in A.D., the reasons for sending Saul away are somewhat different.

Here, Saul's life is threatened by the Zealots, who are getting ready to confront the Romans over Caligula's intended desecration of the Temple, and the last thing they want is a Jew like Saul running around and telling people that the Temple is irrelevant now because Jesus fulfilled the Law. The Christians in this episode have struck a truce with the high priest Caiaphas and have promised to respect the Temple, and Saul, ... 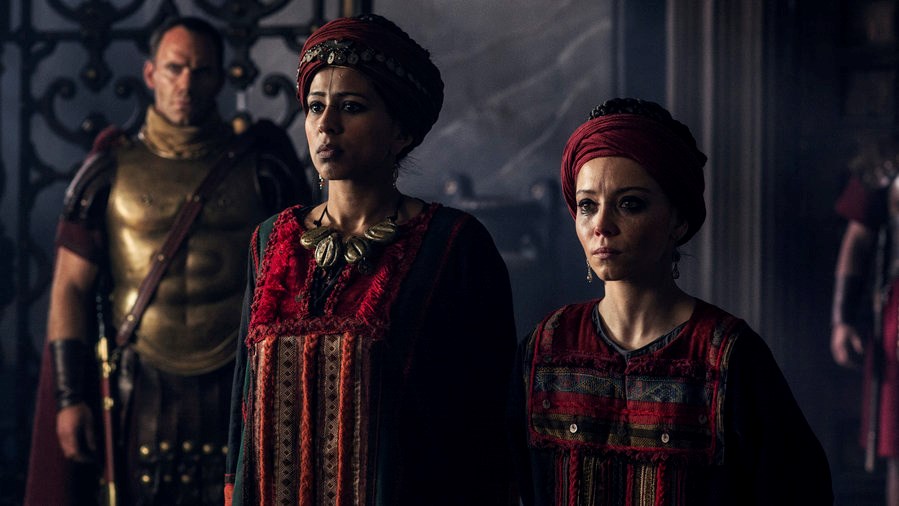