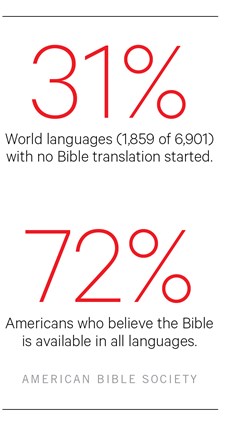 WA dubbed the process Mobilized Assistance Supporting Translation (MAST) and has since used it successfully in several other east Asian countries. WA has 115 mast projects under way, and is set to add 120 more in 2015.

A MAST translator can draft and quintuple-check 34 verses a day, which means both Testaments could theoretically be written in 61 working days, Smith said.

“Accuracy for us is the highest value,” Hersman said. “That’s not to say you can’t be accurate and do things quickly, but the whole reason we have our checking system is quality control.”

It takes WBT anywhere from 5 to 20 years to translate the New Testament into a new language. On-the-job learning is effective, and inexperienced translators hone their skills as they go, Hersman said. But a quick translation experience doesn’t provide them the chance to practice extensively.

And speeding up the process leaves some things behind, said Valerie Martinez, who is translating Scripture with her husband for an indigenous group in Mexico through Commission to Every Nation. Taking time on a translation ensures that the people group, if pre-literate, can have input on their alphabet and can learn to read their own language. Involving a group’s influential citizens, which can aid acceptance of the Bible, also takes time.

“The indigenous people could easily think that a fast translation communicates that they aren’t as important as people who speak a majority language, so [they’re] not worth the effort to do it carefully and well,” said Martinez.

For those waiting, the translation “cannot be done too quickly,” Kramer said. “Yet, can we get ahead of ourselves? I hope we don’t, because we do pray that God will stop us if we do.”