I am not a big fan of remakes. I’m a purist with both feet firmly planted in Camp “The Original Was Better.” So I’ve been on the fence about Disney’s latest project to make live-action versions of their classic animated films. These movies are long-lived and long-loved; should Disney mess with success?

Cinderella gave the answer I hoped I wouldn’t get: they shouldn’t.

To its credit, the movie is remarkably faithful to the plot and characters of the 1950 animated original; thus, it doesn’t have much material with which to distinguish itself. Director Kenneth Branagh and the filmmakers tried to make the story feel new again, and for the most part they succeeded. But oddly, the movie’s best moments are the ones that didn’t change at all.

The story is, of course, the same: Ella’s childhood is fantastically happy until her mother’s death. On her deathbed, Ella’s mother gives her the film’s main sentimental tagline: “Have courage and be kind.”

Years later, grown-up Ella (Lily James) and her father enjoy quiet lives until he makes the always-questionable decision to marry the worst woman on the planet (seriously, in no version of this story does that choice ever make sense). Lady Tremaine (Cate Blanchett in a role that’s just as too small for her, as mice are too small to pull a carriage) and her two horrible daughters, Anastasia and Drisella (Sophia McShera and Holliday Grainger) make Ella’s home a cruel place. She starts by manipulating Ella, who’s kind to a fault thanks to her mother’s charge, into giving up her bedroom for her stepsisters. It’s a short jump from there to ordering Ella to cook ... 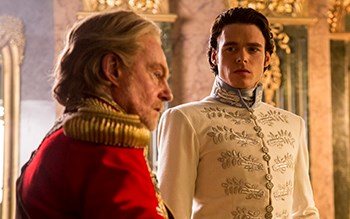