Critics weigh in on an aptly-named film and an intriguing start to a "spiritual procedural."
Jessica Gibson|March 13, 2015

The Second Best Exotic Marigold Hotel opened last weekend, and critics across the board agree its name is apt. The sequel to 2011’s The Best Exotic Marigold Hotel returns to the cast of elderly Anglo A-listers that made the original a success. The group of retirees who first came to the Marigold to spend their last years in India have settled into a tight-knit family of sorts, enjoying comfortable, though still romantically intriguing, lives at the hotel. The plot juggles these relationships alongside the development of a second Marigold hotel to questionable success.

Christy Lemire writes for RogerEbert.com that “Parker’s script superficially bops around between these various story lines until they all converge in the inevitable Bollywood dance sequence . . . Madden’s movie is crammed with so many characters that we never spend enough quality time with any of them for their stories to resonate.” Variety’s Peter Dubruge disagrees, saying, “the cast make their characters so lively, we’re happy for the chance to spend more time with them.” Vulture’s Bilge Ebiri also thinks the cast saves the disjointed, busy plot, saying, “It could have easily become a dog’s breakfast of subplots and wacky-old-person shenanigans. But the proceedings remain dignified and smooth, thanks to the game cast.” These reviewers all especially approve the addition of Richard Gere to fill Tom Wilkinson’s slot in the original; Dubruge calls Gere the film’s “secret weapon,” saying, “[he] can weaken the knees of a certain demographic faster than you can say ‘osteoporosis.’” Ebiri concludes with an even-keeled judgment: “The ... 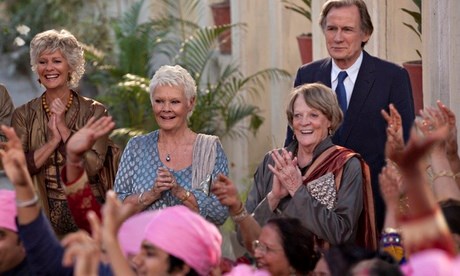