Alissa’s note: Ken Morefield, a long-time contributor to Christianity Today Movies and a cinephile and critic for whom I have great respect, writes a monthly post we call “The Long Tail.” Each month, he looks at a few films that are being primarily distributed to American audiences through DVDs or Internet streaming and tries to surface some movies that might otherwise fly under the radar. Look for a new column every first Tuesday of the month!

Now entering its thirteenth year, Film Movement’s “Film of the Month Club” is cherished by fans of world cinema who may not be able to afford to attend festivals. Subscribers get a feature film on DVD, often weeks or months before that film is available via streaming outlets.

The Club’s January and February selections highlight the value of the service, particularly for those of us who don’t live in major metropolitan areas and don’t have access to specialized brick-and-mortar DVD outlets. Love Me and Traitors are interesting, engaging films that transcend their genres largely because they don’t play out their genre stories in settings with which American viewers may be unfamiliar.

Maryna Gorbach’s and Mehmet Bahadir Er’s Love Me is a cross between Pretty Woman and The Hangover, with just a splash of Before Sunrise. Cemal (Ushan Çakir), a Turkish man on the verge of an arranged marriage, is dragged by his uncle to a bachelor party weekend in Ukraine. In a landscape of brazen sex industry tourism, Cemal’s half-way decent guy credentials are established by his reluctance to engage in prostitution—at least in its official forms. Whether he can withstand the peer pressure to take advantage ... 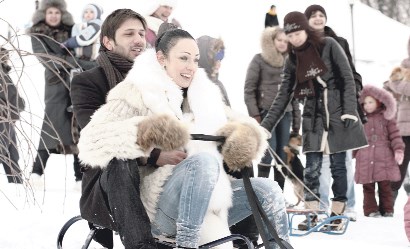