“I believe in miracles,” director Patricia Riggen said in her exclusive interview with me about The 33.

She was citing the low probability that the Chilean government, even with the help of the rest of the world, could locate and rescue thirty-three miners buried deep in the earth by their mine’s collapse. Covered by a rock larger than the Empire State Building, stocked with only a three-day supply of food, starved for natural light, and enduring constant, sweltering heat, the men kept each other alive with faith, prayers, and courage.

Maybe the real miracle is not that a surface drill found the proverbial needle in a haystack, but that when it did, normal human beings had banded together rather than tearing each other apart. It’s worth pointing out that Hector Tobar’s book, which was written at the same time the film was being made, reveals that the miners came from different faith traditions. There were Roman Catholics, of course, but there were also evangelicals and at least one Jehovah’s Witness.

When you are eating what you think is your last meal, it becomes a communal experience even if the cookie hasn’t been consecrated by a priest. When you cry out to God from the belly of the earth, you are less concerned with whether the man next to you is kneeling or sitting.

The biggest challenge facing Riggen, Tobar, and the screenwriters is that the story is both well-known and fairly static. The first act sets up the domestic lives of the miners—one is on the verge of retirement, one is starting a family and uncertain whether mining is the best job choice, one is scandalizing the village by balancing a wife and a mistress who are aware of each other and battle for ... 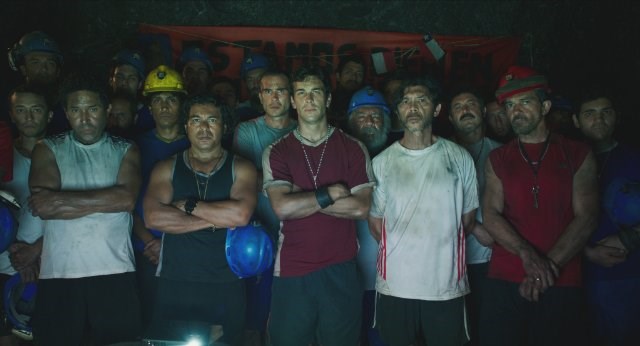