The 24th James Bond movie shows that franchise films don’t have to be innovative to be fun.
Jessica Gibson|November 10, 2015
Image: Metro-Goldwyn-Mayer Studios Inc.
Daniel Craig in ‘Spectre’
Our Rating

I am not a James Bond fan. I don’t have anything against the movies at all, it’s just not my first choice in the long lineup of action-adventure franchises available to the modern fangirl. So I thought that I’d be going into Spectre without any expectations and that I could come out offering an unbiased outsider’s perspective.

I realized pretty quickly that idea was ridiculous. I actually have a lot of expectations about superspy movies, and most of them come from the Bond universe. I was looking for the tropes: car chases in increasingly preposterous urban settings, supervillains with sleek desert fortresses and improbable aspirations to world domination, and weak-kneed women swooning over a spy in a bespoke suit.

Spectre played fast and loose with every classic Bond trope I could think of, and probably many more besides. Fans and uninitiated moviegoers should not go into Spectre expecting Skyfall levels of narrative craft and character depth; Spectre doesn’t say much beyond, “Daniel Craig is still an awesome Bond, Bond is still awesome just the way he is, enjoy yourselves!” And maybe I’m just a sucker for trope-y popcorn flicks, but I did have a great time.

Spectre is Craig’s penultimate performance as 007 and operates as a kind of summary of all his plots so far. Having at least a little knowledge about Craig’s previous three Bond films would definitely help. Spectre picks up right where Skyfall left off, and makes numerous references to characters and plots in it, Quantum of Solace, and Casino Royale.

The movie opens with Bond doing the most Bond-y things imaginable: sauntering around beautiful Mexico City on an unapproved covert mission and stopping just ... 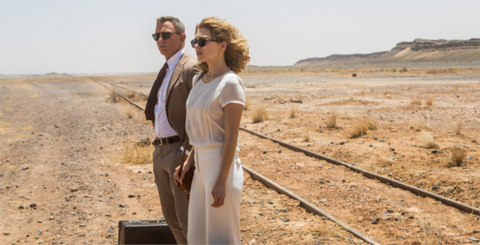