It’s too easy to be disappointed in a director these days. The rise of mass production, mass consumption—mass everything—turns Guillermo del Toro into Del Toro Incorporated; when he disappoints, we demand a customer service line. Internet social media currently fill that function, and the ratio of angry rant to thoughtful conversation probably matches that of corporate tele-camps. And movies are especially vulnerable to this because of the unique way they mix business with art.

It’s complicated, yes—but there is something inescapably tawdry about reacting to a film the same way one would a stick of deodorant.

Often the complaint is simply that the director did not give us what we wanted. It’s surprising how many boil down to this: “This is different than the trailer.” “So-and-so was barely in the movie.” “It was too sad.”

This sort of thing says a lot about what the audience felt entitled to—and little about anything else. And it works no better with movies than it does with the spiritual; always consider that the reason a prayer to the movie gods went unanswered may have been that the prayer was extremely stupid.

In this context, it becomes a lot harder to criticize something well. It is especially challenging with a movie like Crimson Peak, because del Toro’s new gothic romance is pretty good.

Mia Wasikowska delights as Edith Cushing, a bookish and imaginative young lady who reveres Mary Shelley and is working on her first novel. A free spirit, she could care less about the exciting additions to Albany’s social scene—the English Baronet Thomas Sharpe (Tom Hiddleston) and his sister Lucille (Jessica Chastain). When Thomas shows an interest in her book, her defenses weaken. After the Baronet teaches her the waltz, Edith does the only proper thing and ends up at his ruined estate as the new Mrs. Sharpe.

The cast is good. Wasikowska will have to keep a lookout lest she find herself excelling in costume dramas for the next twenty years. Jessica Chastain, who always seems to want to slash at people with a knife while screaming hysterically, for once gets to act on these repressed desires. She seems to enjoy it. Tom Hiddleston and Charlie Hunnam (as Dr. Alan McMichael, Edith’s hometown admirer) do their duty, as does a welcome Jim Beaver, who plays Edith’s captain-of-industry father.

The film looks good, too. Del Toro clearly drew from some of his more vibrant technicolor inspirations, like the Italian director Mario Bava and the Hammer Horror films. Where some filmmakers would be embarrassed to use color so boldly, del Toro’s filmography works as a treatise in color theory. In Crimson Peak he fittingly uses red to stunning effect. Sometimes it frightens by invading scene palettes in jarring slashes. The rest of the time it lurks at the edge of the frame, watching you.

Ultimately, though, Crimson Peak is a movie that’s only prettygood. It’s fine. And for this director, working in this genre with this budget and this cast, that’s almost worse than making a bad movie.

The story is where the cracks begin to show. Don’t get me wrong, it follows the conventions of the gothic tale just fine.

And there’s nothing wrong with following those conventions. Originality in genre is overrated. Genre storytelling and consumption is a ritual—repetition is part of the point. That being said, the story in Crimson Peak is so symmetrically structured as to rob the story of most of its mystery before it even begins. Certain sound effects and details in the first act, which I won’t spoil by naming here, are dangerously direct and give away much of the plot—my screening companion, who never watches horror, felt the same way.

And the theme is hammered in like a stake in the heart. Two couples representing two different “views” on love—one symbolized by a butterfly, the other by black moths? A crowning monologue where we are informed that “monstrous love makes monsters of us all”?

This stuff is pat, it is on the nose, and it does not work. It’s also a surprising flaw for a director who is vocally resistant to structure and constriction and staleness in all its forms. None of this ruins the film—it will make a fine Halloween date night. Dedicated del Toro fans will want more.

Perhaps it is not fair to lay the blame wholly at the director’s feet. Filmmaking is collaborative, and without a window into the production process we can’t know what sacrifices and compromises the team made behind the scenes. Yet to me, the same smell hung over Pacific Rim. I think the disparity between his visual flair and his writing is going to be the defining challenge of del Toro’s career. Some will say that visual flair outweighs memorable characters or good writing. It doesn’t, but even if it did—someone who chooses to work in genre narrative can’t ignore those things. 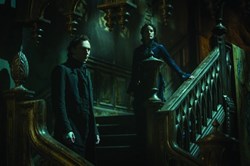 Guillermo del Toro is often called an “alchemist.” It is a good word for the standard bearer of a great medieval, neo-Platonic style. The director describes his prolific monster-building as an attempt to create a cosmology of the world around him. Despite his struggles with Catholicism (he was exorcized twice as an infant by his grandmother), del Toro always speaks of monsters in spiritual terms.

Crimson Peak opens with the line: “Ghosts are real. This much I know.” Hopefully his next film cements his reputation as an alchemist in this more profound sense—and not as someone who fails to turn something good into something golden.

[Spoiler alert!] This movie deserves its R-rating, but anyone above the age of 17 who enjoys a scare will be able to handle it. The most graphic parts are the gore—several characters get stabbed and hacked in various ways, with blood very visible. One man gets brutally murdered by having his head smashed. The ghosts and monsters take the form of animated decomposing corpses. There are two sexual scenes, although the only nudity is a glimpse of the top of a man’s butt. In one of them you can see a woman’s hand buried beneath a man’s clothes. There are, spoiler alert, themes of incest. There are several other frightening moments. To pre-empt angry comments about the violent content, I’d suggest that if your theology doesn’t account for both Philippians 4:8 and Judges 4:21, you’re doing it wrong.

Tim Wainwright's writing has been featured in the Atlantic, CT, and RealClearMarkets. He tweets here and blogs here.