Pan stands in the very long, very intimidating shadow of really great Peter Pan adaptations. Inevitably this “new take” on the story from director Joe Wright will be measured against Steven Spielberg’s Hook(Robin Williams as the, yes, grown-up flying boy pitted against Dustin Hoffman’s devilish, aged Captain Hook). Pan and Hook both set their stories outside the timeline of J.M. Barrie’s original, and both rely on colorful, childish, ridiculous fun to give the movies energy.

But where Hook balances its whimsy with the weight of Barrie’s mortal themes, Pan does away with seriousness in any form, leaving us with a steampunk fantasy more concerned with cartoonish crocodiles, Nirvana references, and flying everything than with its source material. Aside from scattered references to canonical terms like Lost Boy and happy thoughts, and a few nods to other adaptations (there’s even a quip about “bad form” for Hook fans), this movie is disconnected from all established notions about Peter Pan stories.

The story moves forward to WWII during the Blitz solely for the spectacle of RAF planes shooting at a flying pirate ship. The ship in question has been kidnapping young boys from a church-run orphanage. Peter (12-year-old Levi Miller, who gives the movie’s best performance) investigates these disappearances and discovers that the nuns, who are horrible anyway, are in collusion with the pirates. In one bungee cord-powered raid, the pirates take the entire orphanage aboard.

Much of the movie was choreographed for 3D, so if you’re prone to motion sickness, beware. The ensuing flight sequence sends the huge ship spiraling through London, dodging blimps, and rocketing ... 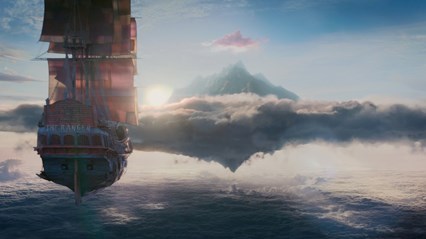