In Birmingham they love the governor—but they love football and Jesus even more.
Kenneth R. Morefield|October 14, 2015
Image: Alan Markfield / Pureflix
Caleb Castille in 'Woodlawn'
Our Rating

Jon and Andrew Erwin really are the best thing going in the Christian movie cottage industry.

There’s your pull quote, and though it is faint praise, I will stand by it.

The Birmingham brothers have followed the game plan parroted by so many Christian auteurs: learn by doing and focus on making sure each film is a little better than the last. In the span of five years they have progressed from October Baby, an earnest but heavy-handed anti-abortion melodrama, to Woodlawn, a historical drama that at least grasps after crossover appeal.

Inspired by a true story, Woodlawn tells the story of a revival at an Alabama high school that parallels the resurgence of its football program. Like Mom’s Night Out, the Erwins’ latest film leans heavily on a genre formula.

But since I tend to like Christian films to the degree they seek to tell dramatic stories in addition to setting up sermons, I actually appreciate the Erwins’ willingness to wed Christian content to well established genres. After a prologue in which Alabama legend Bear Bryant (Jon Voight) sees his Crimson Tide outmatched by an integrated USC program, Woodlawn shifts focus to a lesser known coach, Tandy Gerelds (Nic Bishop). Coach Gerelds’s team is in disarray, and there are rumors that the program, indeed the school itself, may soon be shut down.

When a shadowy team observer, Hank (Sean Astin, with 70s sideburns), asks for permission to address the team, Gerelds isn’t thrilled. But he allows it. As Gerelds walks out of his office and down the dim hallways towards the gym, we hear Hank preaching that Jesus is the way, the truth, and the life. The last line comes as Gerelds literally walks out of the darkness (of the hallway) ... 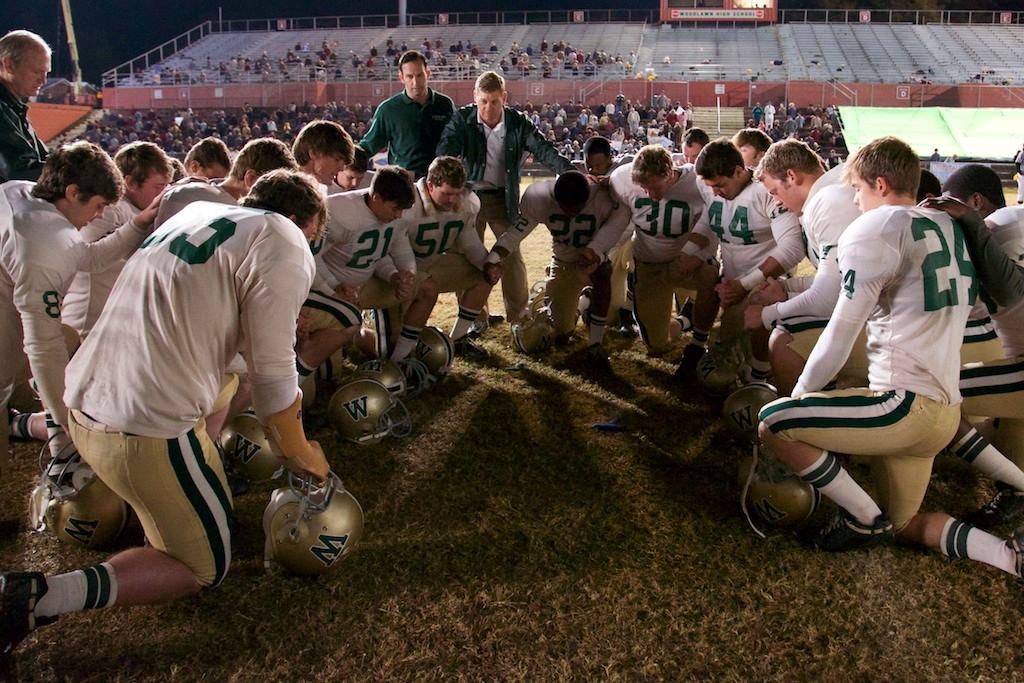