Hendrix is no Thomas Kinkade. Which means he gets us a lot closer to the Bible.
Interview by Katelyn Beaty|October 20, 2015

You might think it childish that every week at Grace and Peace Fellowship, a PCA church in St. Louis, John Hendrix spends the sermon drawing. Most churches do not look kindly upon adults bringing crayons and paper to the pews. But for Hendrix—a professional illustrator who has sketched every day since age 7—sketching helps to capture the strangeness of the Christian faith.

“My faith story is very similar to the way I think about my sketchbook,” Hendrix told CT. “It’s a collision of words, images, ideas, and concepts that are metaphorical or challenging.”

A St. Louis native, Hendrix never intended his in-church sketches for public viewing. Alongside teaching illustration at Washington University in St. Louis, he spends his week drawing for high-end mainstream clients. Those have included The New York Times, Vanity Fair, Sports Illustrated, children’s book authors, and In-N-Out Burger (as well as this magazine). There, it’s easy “to become a mercenary to making something that’s good or productive,” says Hendrix. 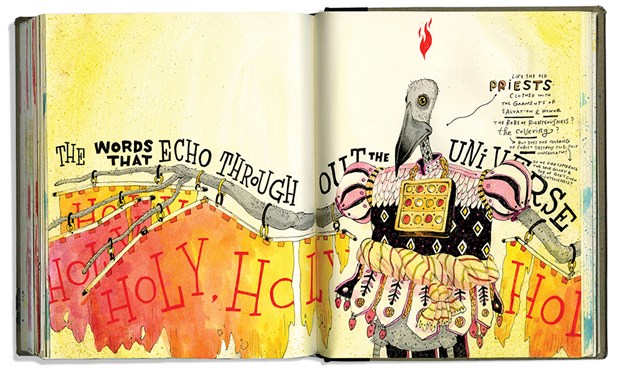 By contrast, the sketches are play—“sitting down and having fun and trying to enjoy the act of creation.” Friends began to ask him about the sketches, which are drawn in pen, then painted in watercolor at home. So Hendrix compiled the best in an online series as well as in a new book, Drawing Is Magic. The following is a selection from those sketches.

The first thing you will notice about them is that they are—well, not Thomas Kinkade. There are sea monsters and birds dressed in priestly robes and mountains with mouths. The words of Jesus are set upon the bellies of cuddly creatures. Some of the drawings are ominous; in Hendrix’s Nativity scene, rendered in red and black, an underground monster appears to open his jaws to devour the Holy Family. “There’s a Where the Wild Things Are vibe that runs through a lot of my drawings,” says Hendrix. “I’m very drawn to the mysteries of the Scripture.” Rather than providing “inspiration”—in the way that word captures a popular Christian approach to art—Hendrix probes the Bible’s odder passages, such as when God puts the deeps in storehouses (Ps. 33:7), or the beast in the Book of Revelation.

In this way, Hendrix recalls Hieronymus Bosch, the late-medieval painter best known for his busy allegorical visions of biblical scenes. But viewers this side of the Reformation will note that, unlike Bosch, Hendrix draws explicitly from the Word and words. Most of his sketches include passages of Scripture or hymn lyrics or C. S. Lewis quotes. As such, Hendrix may offer a distinctly Protestant aesthetic, one that takes the Bible very seriously, without always depicting it literally.

Regardless, the sketches, Hendrix says, are best understood as a type of prayer. “I can look back at the times in my life when I struggled as an artist, and it’s the times when I did not have a regular sketchbook life.” Drawing during the sermon may be childlike, but such is the kingdom way of things. —Katelyn Beaty, print managing editor 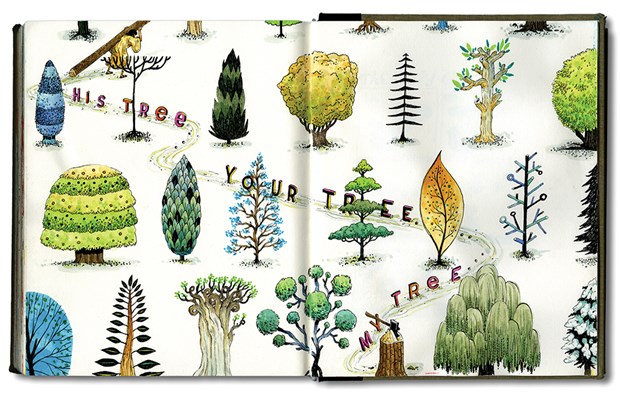 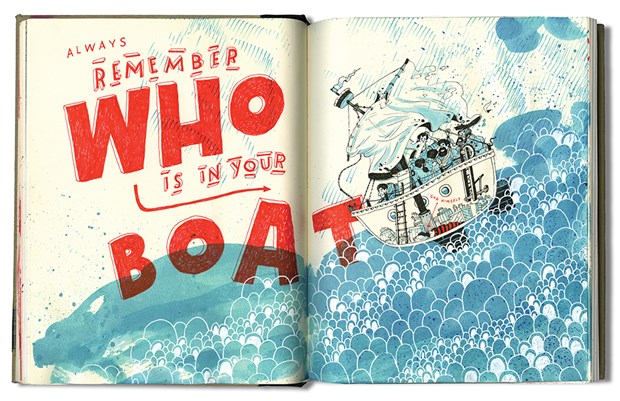 The art that can impact and influence people is art that people have to participate in. There’s a bit of mystery in the best art. 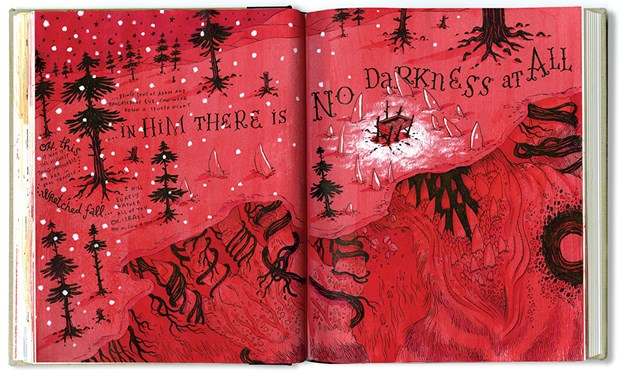 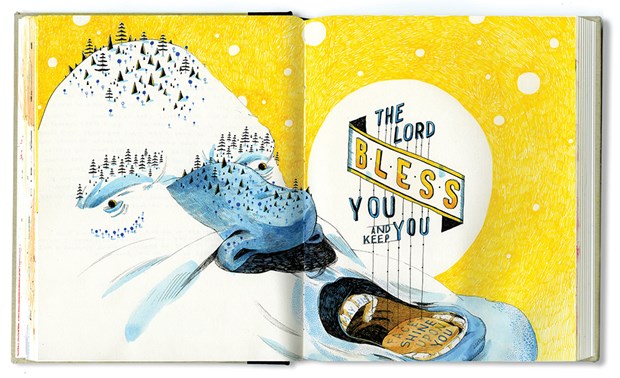 Kids play all the time—it’s their work. For adults, play is very difficult. Sitting down and having fun and trying to enjoy that act of creation—that’s an act of worship. That’s what God was doing when he made things. That’s something I try to cultivate. 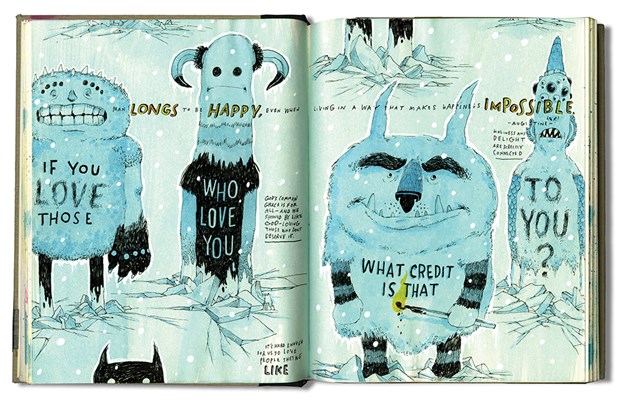 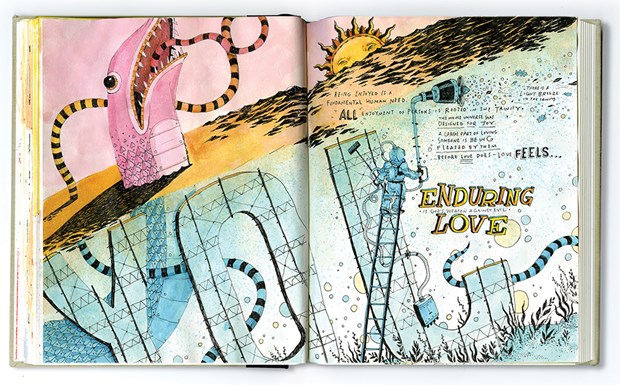 When the Puritans came to America, they gave us an aesthetic that less is more. A Spartan life visually is what it means to be holy. [But] God did not make the world Spartan because that makes him more holy. 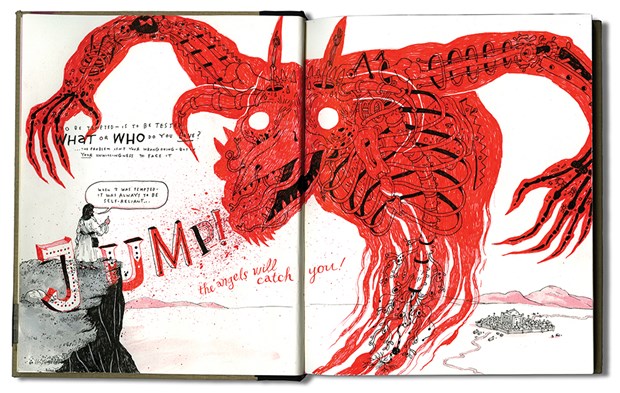 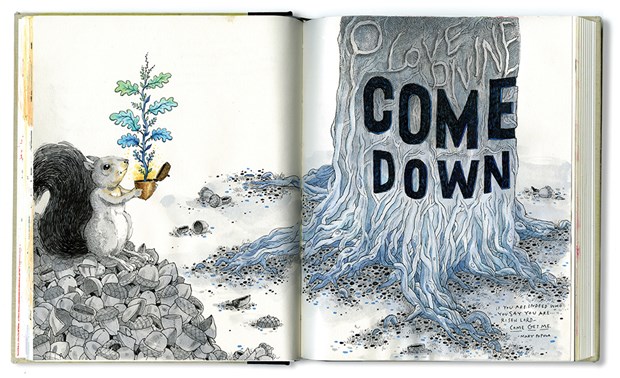 John Hendrix teaches communication design at Washington University in St. Louis, where his specialties are hand-drawn typography and illustration. See more at JohnHendrix.com and on Twitter @hendrixart.